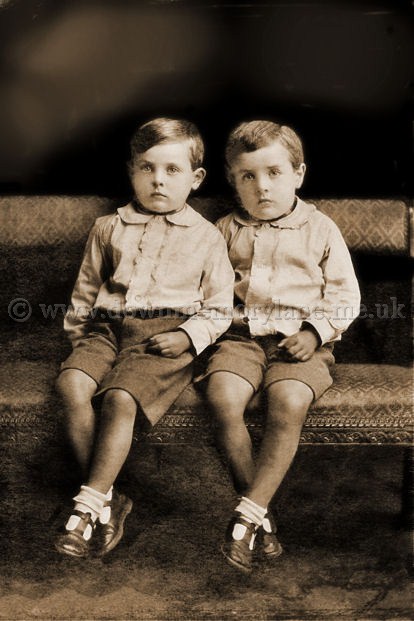 HARKNESS BROTHERS 2548
Here we are in the year 1936 at William Abernethy's Studios, 29 High Street Belfast who were "By Royal Appointment to The Late Queen Victoria".
These two are brothers, John and William Harkness, the reason for the photograph is that John on the left was 8 years old and was born at Crosshill, Crumlin.
Their shirts have frilled collars and a frilled front with mother of pearl buttons and of course the sandals which have not changed in over 70 years. 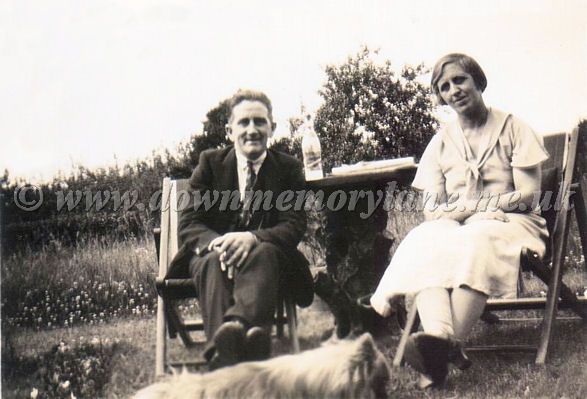 DOWN BY THE RIVER 3310
Here in their back garden which gently sloped down to the river in 1946, sitting relaxing in their deck chairs for at long last the war is over.
This Jimmy Halon who is having a quiet smoke with his wife Sarah and a bottle of lemonade should they get thirsty. The dog's name is not known.
Jimmy ran the local cinema beside the bridge in the market yard which he actually built himself.While his wife Sarah ran a shop two doors down from the Peckenham Arms pub which was next door to Selina's paper shop. It was in Sarah's shop at the back that Jimmy ran his barber's business.

HANLON FAMILY 3322
Here in the back garden on a summer's day in 1925 we have the Hanlon Family, on the left is Mum Sarah on the right Dad James while in the middle is their pride and joy Daughter Isobel. It looks like they have been doing some work in the patch behing them for it is immense no one will go without their greens in this family and with the paper in Mum's hand they are going for a well earned rest. 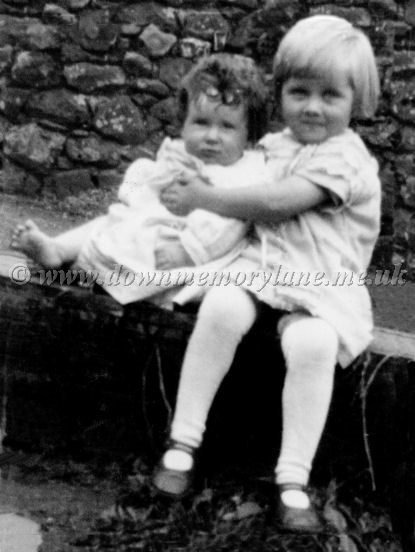 TAKE THE PHOTO 3323
Trying her best to hold on to this squirming bundle in 1929 is Emily Hanlon looking pleadingly for the photograph to be taken quickly.
All we know about the bundle of joy is that she was one of the Costello children.
SARAH HANLON 3330
Sitting having a rest for looking after her twins is no mean feat back then, no disposable nappies, all washing was done by hand.
Even so Sarah Hanlon can still put a smile on her face as she proudly shows off her girls Emily and Maud.
But by 1927 Sarah had heartache for one of the twins had passed away. 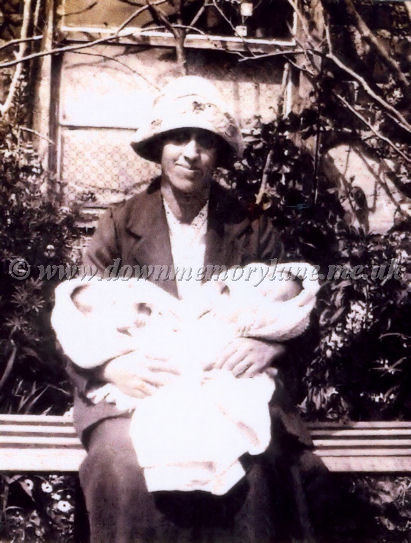 TWINS 3325
Sitting out enjoying the sunshine in front of Sarah's husband's workshop in which he made anything and everything including greenhouses.
On the left is Isobel Hanlon, Edie Pritchard holding one of the twins Emily, then Sarah Hanlon the mother of the twins holding Maud and at the end is Annie Pritchard. 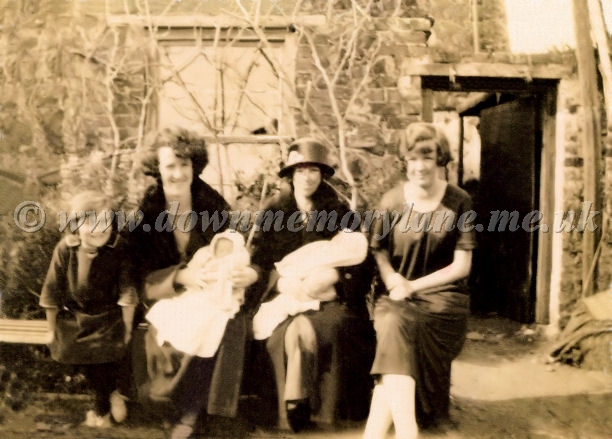 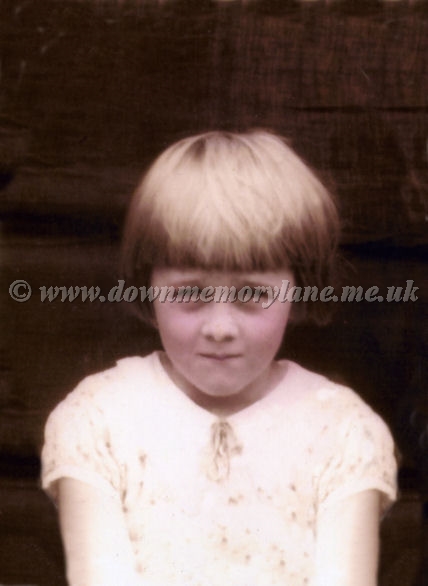 EMILY HANLON 3332
This Emily Hanlon having her photograph taken by her father James Hanlon who did photograqphy for customers at the back of his general shop in Crumlin.
James did all the developing and printing for customers and he was very good at it for this is a original colour photograph not touched with colour like many where done back then and it was 1928.
EMILY HANLON 3333
Here in the back yard of his shop in Crumlin James Hanlon is taking a photograph of his young daughter Emily who he probably bribed her with the apple to stay still. 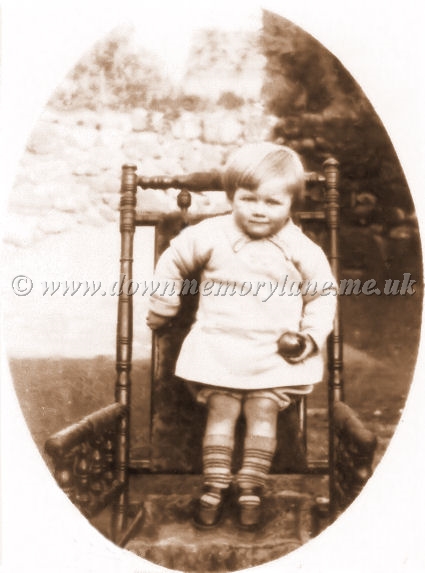 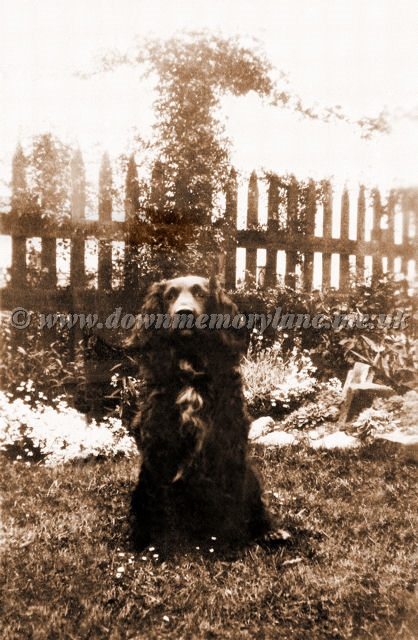 A FAITHFULL FRIEND 3334
Here in someone's back garden in Crumlin is a faithfull friend who sits paitently waits for his master to take the photograph. 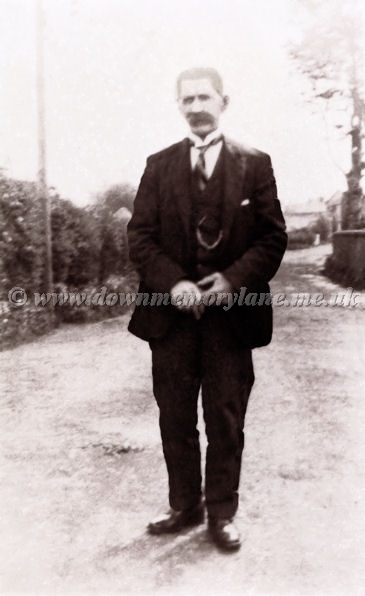 JAMES HANLON 3344
Here we have James Hanlon in 1905 looking very like the English prime minister Neville Chamberlin in the road at Crumlin.
James used to live at Newtowncrommelinwhich overlooks the Glenravel Glen (Glen of the berries) about 12 miles from Crumlin and it was to here James came in 1900 along with his wife and son James. Later on in life when the army were driving through Crumlin High Street James was tragically knocked down and died from his injuries. 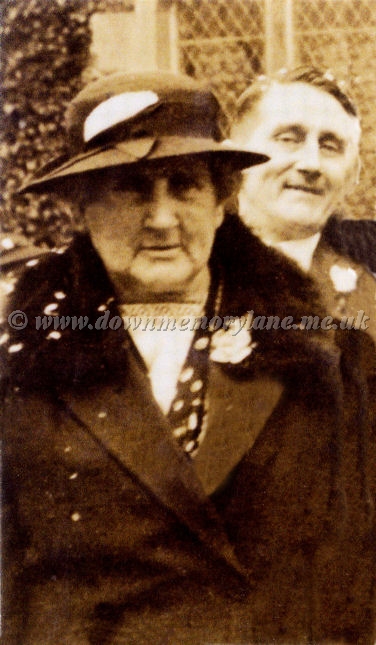 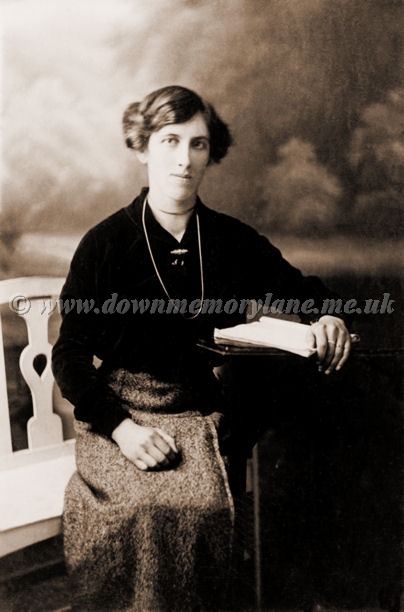 HANLONS 3354
It's possibly mid May or June here in 1927 on a fresh but cold windy day but that does not stop the Hanlons going out for a brisk walk.
On the left is Kate Hanlon while sitting up on the wall is Isabell Hanlon with her arm round her sister Emily Hanlon while the other lady is Unknown.
Finally in front of her with her scarf blowing in the breeze is Sarah Hanlon nee Farr.
The reason I surmised it was mid May or June is the Chestnut tree behind them, now a lot of people think the chestnut seeds it produces are only for playing conkers with. During the two world wars the chestnuts were used as a source of starch also acetone could also be made from them for the war effort.
In the past, chestnut seeds were used for whitening hemp, flax, silk and wool. They contain a soapy juice, fit for washing of linens and stuffs, for milling of caps and stockings, etc., and for fulling of cloth. For this, 20 horse-chestnut seeds were sufficient for six litres of water. They were peeled, then rasped or dried, and ground in a malt or other mill. The water must be soft, either rain or river water; hard well water will not work. The nuts are then steeped in cold water, which soon becomes frothy, as with soap, and then turns milky white. The liquid must be stirred well at first, and then, after standing to settle, strained or poured off clear. Linen washed in this liquid, and afterwards rinsed in clear running water, takes on an agreeable light sky-blue colour.
It also took spots out of both linen and wool, and never damages or injures the cloth. 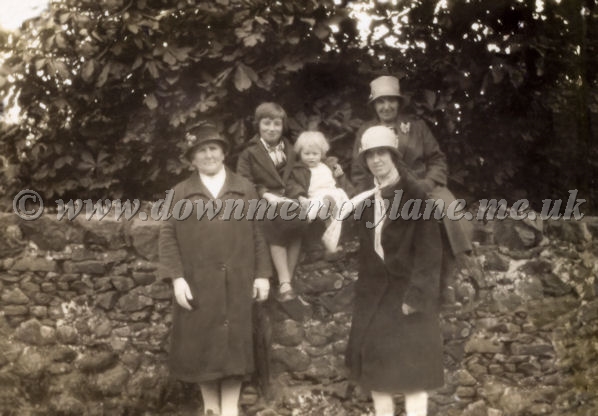 SARAH HANLON 3356
This is Sarah Hanlon nee Farr who was brought up with five Prichard half siblings by the Prichards.
Sarh ran her own shop in which Sarah sold sweets and groceries in Crumlin and was married to James Hanlon. 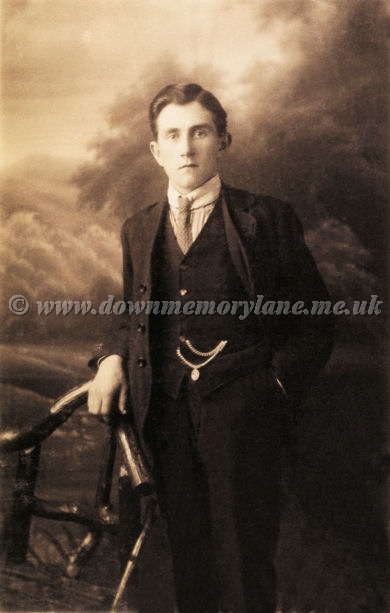 JOHN JAMES HANLON 3357
This is John James Hanlon known to his friends as James back in 1920 aged 24 being photographed in a studio and quite a prosperous looking young man.
James was born on the 13th July 1896 at Montalto, Newtowncrommelin which is a small village and civil parish in County Antrim. It lies 8 miles north-northeast of Ballymena and is part of the Borough of Ballymena, the village of Newtowncrommelin was founded in the townland of Skerry.
James's parents were Kate Boyle and James Hanlon who was a farmer also had three other sons Fred, Albert and Max and also two daughters Florence and Kathleen Maude. James father John Hanlon was also a farmer but James had other ideas about what he wanted to do. James in 1917 when he was 21 years old married Sarah Farr from Crumlin village and it was there they set up home. But James being of an entrepreneurial spirit soon set up a shop in the Crumlin village which sold groceries and sweets which his wife Sarah looked after. Next James opened a barber shop and James was the barber, he was also a clever carpenter and while in great demand he built for himself not only a very large greenhouse to grow tomatoes to sell in Sarah's shop but a photographic studio and a dark room where he developed and processed his own and other peoples films and was an accomplished violinist. James having been to Belfast many times and heard about movies being shown in cinemas in England decided he wanted to show the movies to the people in Crumlin,but they didn't have a cinema, so James being James didn't let that put him off the idea so along with friends called Adams and McKilwinny they built their own cinema with a balcony. James called it "The Camolin Cinema" and when it opened it's door to the public it was one of the first cinema's in Northern Ireland in the 1920's. He would go along with friends to Belfast in his car a Morris Bullnose with a cloth top which was the only car in Crumlin and collect the latest films by Warner Brothers to whom he was aligned. The seats were Three pence, Sixpence and Nine pence up in the balcony.
Later on in life James and Sarah moved to England 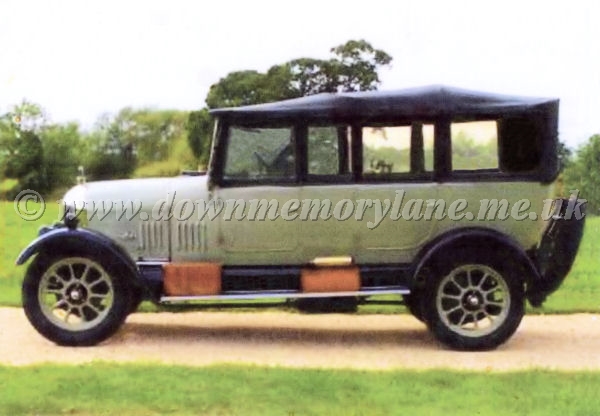 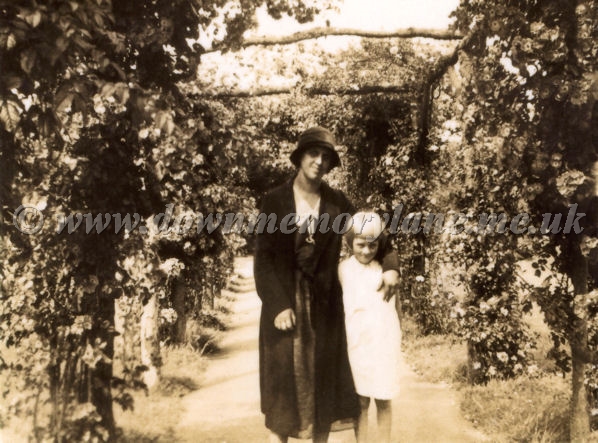 SARAH & EMILY HANLON 3359
Standing with her arm loving round her daughter Emily in 1934 is Sarah Hanlon enjoying a summers day walking through a corridor of roses. 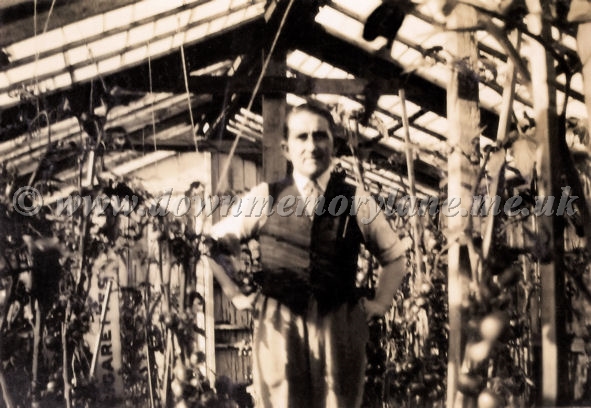 JAMES HANLON 3360
Standing proudly showing off his tomatoes in the greenhouse in 1932 which they sold in his wife Sarah's shop, James of course built the greenhouse. 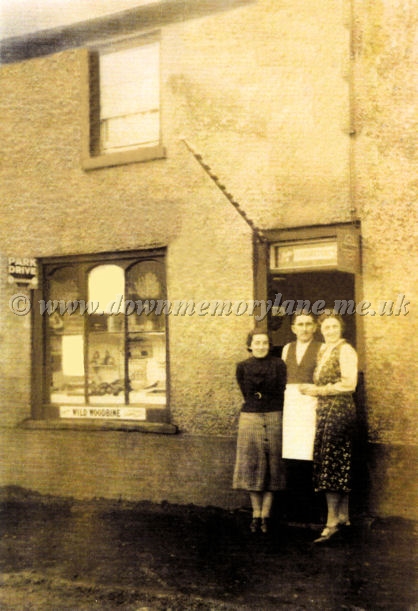 HANLON'S SHOP 3361
Standing in the doorway of his wife Sarah's shop which sold groceries and sweets is James Hanlon in 1935 in his role as Crumlin's village barber.
On his left is his daughter Isobel and the other lady is a customer who is Unknown.