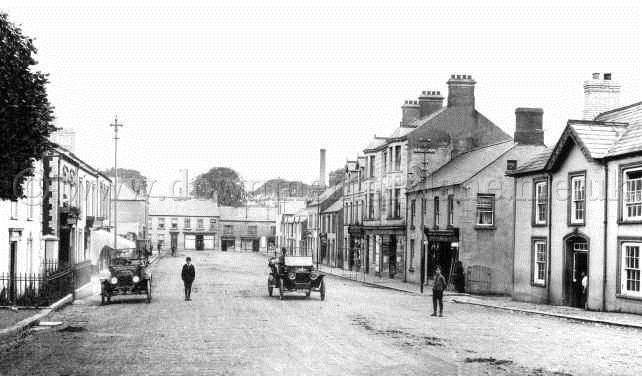 NEW STREET 1388
"Like father like Son" is an expression that rings true of this photograph in New Street Randalstown in 1915, for the camera man this day was W.A.Green's son. W.A.Green was for once not behind the camera but seated in the car in the middle of the street. The car to the left has it's engine running as you can see the smoke to the left of it, probably because the car lights are on for the photo. Over to the right is Mrs French standing in the doorway of Temperance Hotel which the family ran from 1877 to 1950. Going down the street next we have R. A. Smyth's the grocers, then Randalstown's own "Whitehouse" as the locals called it, why I don't know. Mr A.M.Purce owned the three storey building and had his draper's shop with also a banner painting business. Outside the shop at the kerbside there are support rods with beams that run back to the shop at an angle. Now look across the road and you will see the reason for them, the awnings, back then they didn't have roller awnings. Now down the same side there are two men with cows on the pavement and beyond them in the street is a man lifting full sacks off the road which must have just been delivered and way in the distance is the tall chimney of the local mill. 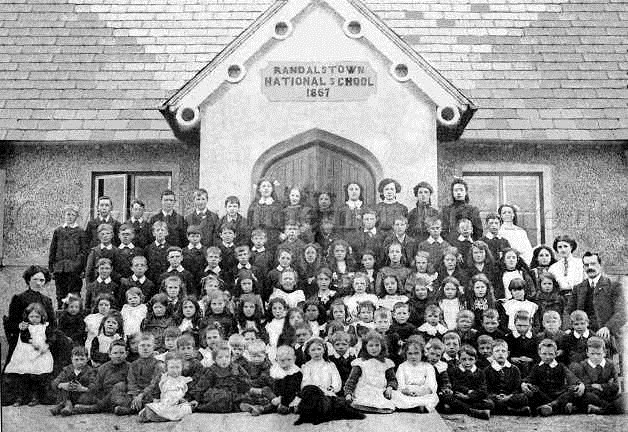 NATIONAL SCHOOL No.2 1391
Photographed outside Randalstown National No.2 School at Feehogue we have the class of 1906. When you look at all the boys white collars and the girls white pinafores their mums had some washing to do and all done by hand. It was the No.2 National school because there already was a National school in New Street. It was built in 1867 for the Rev.James B. Houston who was then minister of First Randalstown Presbyterian Church and of course was known locally as Huston's School. In 1911 renovation work was done to the school and then became a National School. In June 1937 both National schools closed and moved to the newly built Central Primary School. Sadly like a lot of old buildings it was demolished in 1960. 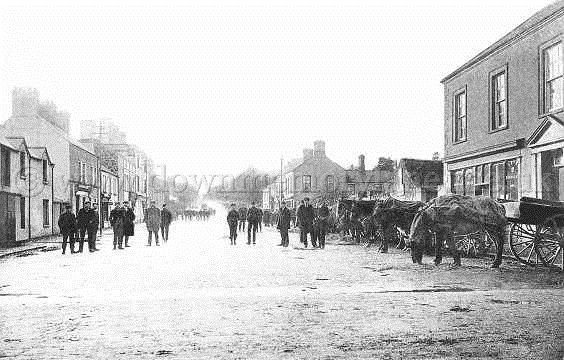 NEW STREET 1399
The year is 1910 and it's Market Day in New Street and when the street was built in 1827 it was known then as New Market Street.
The market was held on the first Wednesday of the month and was mainly for farmers, butchers ect for the buying and selling of cattle, horses, pigs, sheep ect. The building on the right was a General Merchant store run by the McFadden Brothers from 1900, before that is was a Drapery and Haberdashery store from 1850 and run by the Bulter family from Craigmore. 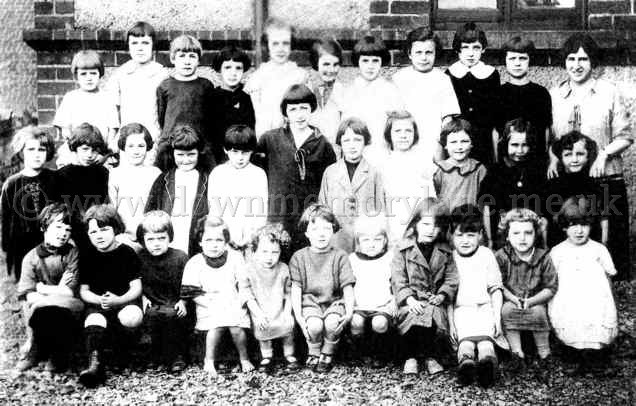 NATIONAL SCHOOL 1859
This National School in 1935 which being on the Craigstown Road in Randalstown was for Girls and today in its place is Mount St. Michael's Maintained Primary School.
Standing at the back are B. Gilmore, V. Gilmore, R. Henry, M. O'Kane with a butterfly broach on her dress, S. Millar, M.Mullan, K. Hamilton, M. Thornton, L. McCann, N. Corr and the teacher Miss Cunningham. Middle row has M. Diamond who has a beautiful Celtic pattern on her dress, S. Magill, M. Kewly, M. McCormack, K. McCann, A. McIlroy, A. Hamill. L. Millar, B. Scott, M. Kennedy is wearing a locket and finally C. O'Kane.
Seated are K.O'Kane, K. O'Kane, O. Gilmore, B. McAteer in her bare feet, D. McKay, S. McKay, D. Dowds, L. Hamill, L. O'Kane, A. Scott and E. McCune. 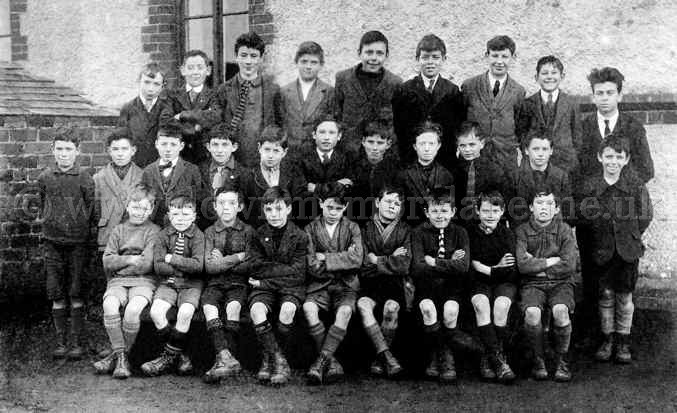 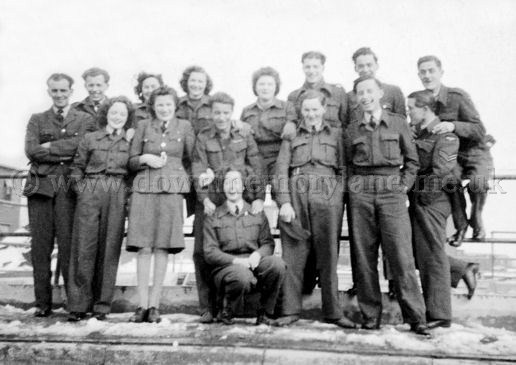 NATIONAL SCHOOL 1860
This is the National School in 1925 which was on the Craigstown Road in Randalstown for Girls and Boys, but today in its place is Mount St. Michael's Maintained Primary School. Today it's the boys getting their photograph taken.
In the back row are Tommy Corr, Hugh McCormack, Bobbie Storrie, Unknown, John McCann, Unknown, Neilie McIlroy, John McKay and Mr. Brendan Down who was the master but does not look old enough! Standing in the middle are Master Robb, Unknown, Jim McCormack, Patrick McCann, John Hurrell, Malachy Keenan, Unknown, Jimmy Crozier, John Gilmore Bernard McCormack and Unknown.
Seated at the front we have Joe McLaverty, Dick McKay, Unknown, Hugh McAteer, Unknown, Jimmy Robb, John Magill, John Dowdal and Terence Robb.
NEARLY THERE 2062
Such happy faces among the RAF service men and women, even though there is snow on the ground.
For it's February 1945 and they know that the end of World War II is not far away. 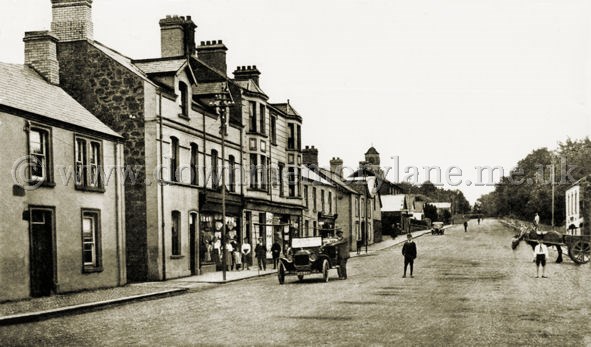 NEW STREET 3476
Here we are near the botton of New Steet in Randalstown back in 1915 while the Great War rages on in Europe.
The first house on the left must be for business purposes as there is a plaque and also a smaller one next to the top of the door. Next door is Mr A.M.Purce owned the three storey building and had his draper's shop with also a banner painting business. Outside the shop at the kerbside there are
support rods with beams that run back to the shop at an angle. These are to keep in place the shop awning to stop the fabrics fading in the sun.
The next building the Randalstown locals called it the ' The Whitehouse' why I do not know, but if you do please let me know. The next shop is R. A. Smyth's the grocers and further up is the French's shop.
Now I know there not a lot of traffic in the photograph, the photographers back then must have been held in high esteem. For here he has the people out of the shops and spaced at a distance are four people with a car at the second person.
The photo was most likely taken by Foster Green whose father was the famous Antrim photograher and is see here standing next to the car in the foreground.