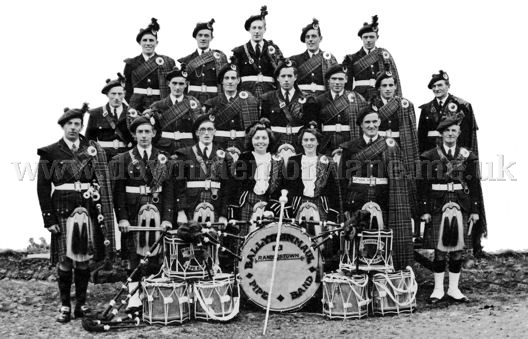 BALLYDUNMAUL PIPE BAND 1752
This is Ballydunmaul Pipe Band having their photograph taken 1947-48 and was unique in that three sets of brothers were in the band.
In the back from the left we have James Surgenor, Isac Dickson, Hall Campbell, Tommy Reid and Johnny Dickson.
The middle row has Bobby Kenny, Jim Reid, Jimmy Leacock, Hugie Mccord, Davy Logan, Stanley Rankin and John Little.
At the front is Sam Scott (pipe major), Andy Murry, David Reid, Lila Davison, Minnie McKee, Davy Leacock and Bill Hoffman (drum major). 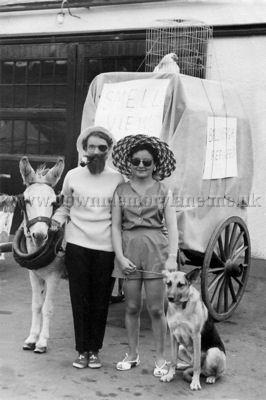 BALLYREAGH REFUGEES 2030
Pity this poor husband and wife who along with their dog, the donkey and cart with all their possions on it. Also the chicken on top are refugees from Smelly View in Ballyreagh. The one with the beard is Phyllis McCaughy and they are really in the Randalstown Fancy Dress Parade. 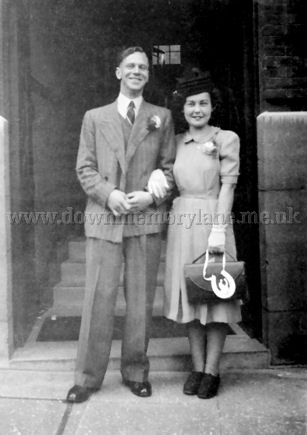 BUTTERFIELD WEDDING 2010
This is Dennis Butterfield and Nellie Butterfield nee McCaughy after their wedding on the 12th July 1947. 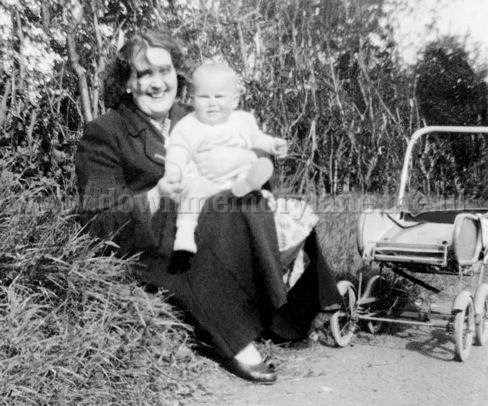 BABY SITTING 2042
Hi I'm Sharon Butterfield and it's 1953. I've brought my Godmother Sadie who's knee I'm sitting on out for a walk to enjoy the sunshine. 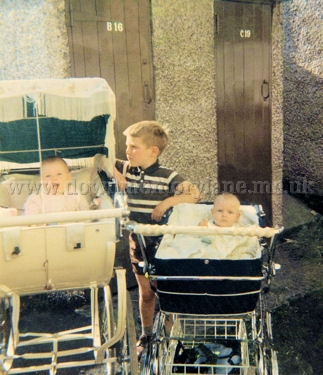 BABY SITTING 2115
Imagine trying to push around prams like this nowadays! In the pram on the left is Barbra Hamill and in the smaller pram on the right is Ann Scott.
Now although the two babies in the prams are looking at the camera the young chap in the middle has far more important things on his mind.
He is thinking of the future of when he will be running a succesful business in Randalstown, his name? why it's Oliver Kerney. 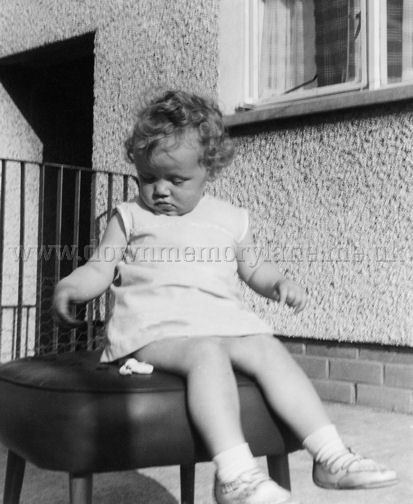 BARBARA HAMILL 2117
Sitting on a stool at a friend's house in the early 70's is Barbara Hamill.
Now what she is looking at and unsure of I do not know either. 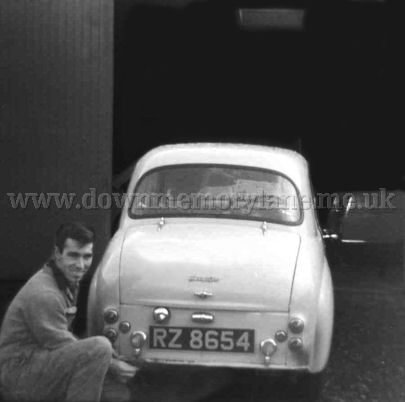 JIM BROWN'S GARAGE 2127
This is Jim Brown examining this Morris Minor for what work needs to be done on it before he sprays it. Jim's Garage was off John Street in Randalstown. 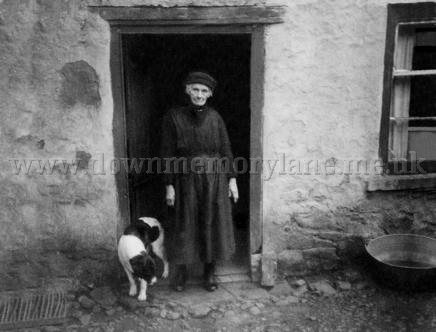 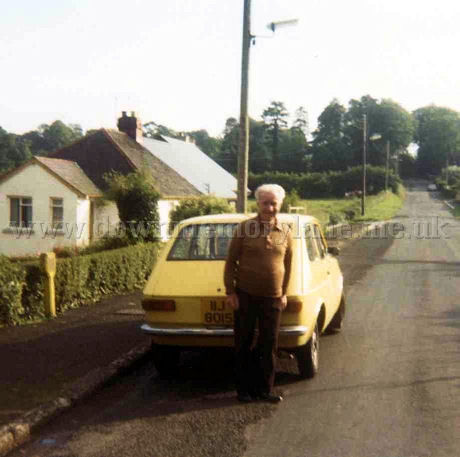 HARRY BROWN 2129
This is Harry Brown when he lived at Lurgan West Randalstown but known to the locals at the Brey. It stopped being a through road in the 70's when the motorway cut right across and it became a dead end.
MRS BATES 2283
Here we have Mrs Bates with her faithful dog standing in the doorway of her home at Moneynick in Randalstown.
Pages: 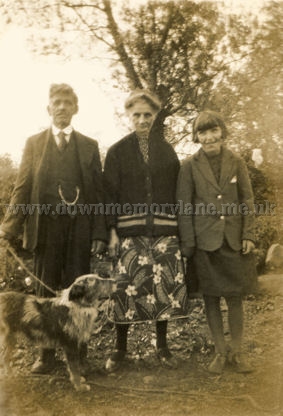 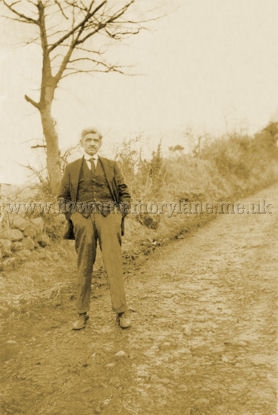 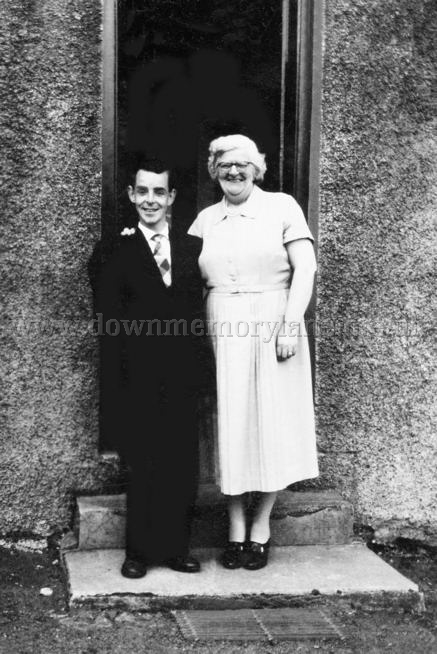 BEST OF FRIENDS 2926
Standing in the doorway out at Ballytresna we have the best of friends James Badger and his Mother-in-Law Mrs McIlvenna.
OLD BLEACH MILL 3326
Let's rewind 30 years to 1982 when the Old Bleach Mill in Randalstown was still in operation and these are some of the girls having a well earned lunch break in the sun.
Sitting on the wall on the left is Averill Warron, Marie Kennedy, Susan McErlaine and Denise Heately.
In front of them are Francis McGuckin, Janette McDowell and Anne McErlaine. 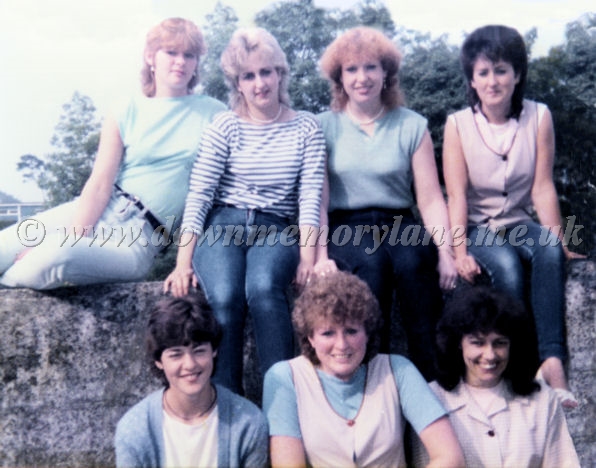 OLD BLEACH MILL 3327
Here we are in the 'Stitching Room' of the Old Bleach Mill at Randalstown.and hard at work in 1982 is Kathleen Letters. Kathleen has not changed a bit still has that lovely smile and the humorous looking eyes. 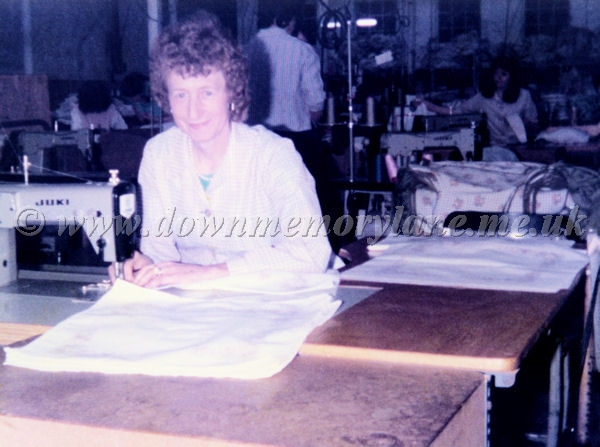 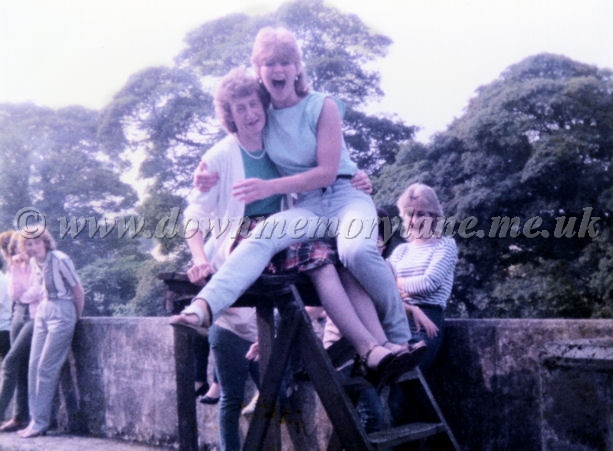 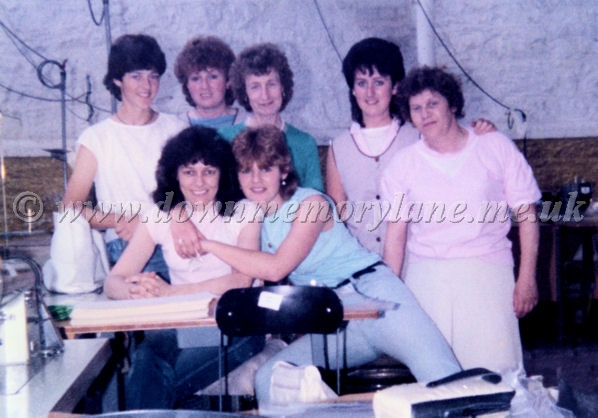 OLD BLEACH MILL 3328
Out in the fresh air on their lunch break in 1982 are the girls from the Stitching Room at the Old Bleach Mill Randalstown.
Having a seat on the platform is Kathleen Letters and always game for laugh who has just jumped on Kathleen's knee is Averal Warron. Laughing at the antics of Averal is Marie Kennedy on the right.
OLD BLEACH MILL 3329
It's 1982 and here in the Stiching Room of the Old Bleach Mill in Randalstown we have some of the girls having a snapshot of their time here.
At the back on the left is Francis McGuckin then Janette McDowell, Kathleen Letters, Desise Heately, Philis Logan, Anne McErlane and Averal Warren.