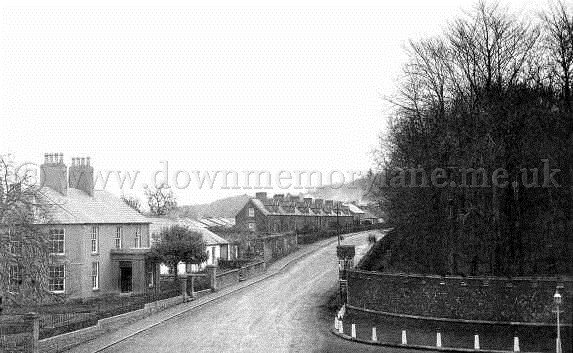 SHANE'S STREET 1398
On the right just off Shane's Street is the entrance to Shane's Castle in 1910. Over to the left is Shane's Lodge built in the early 1800, next door was the
Randalstown Post Office from 1807 to 1840 and was occupied by the Hill family. In the distance the row of houses were Lord O'Neill's Estate workers
cottages, built in 1860 on the site of the original railway station. 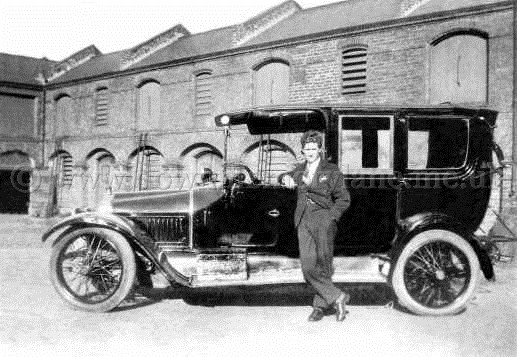 SPENCE BROTHERS' TAXI 1403
Posing next to his taxi which is a 1920's Minerva and was built in Belgium is George Spence who along with his brother Craig owned a petrol station on
New Street. Behind him are the buildings which form the Market yard which hasn't changed since being rebuilt in 1982 after a fire gutted the old buildings.
During the Second World War units of the Royal Electrical and Mechanical Engineers stayed here and also the American soldiers. 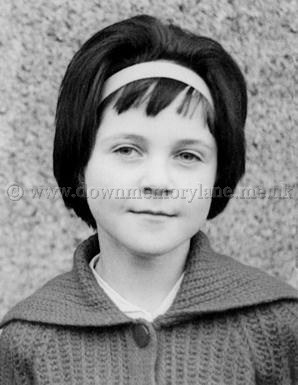 BETTY SMYTH 2230
This is Betty Smyth at Barnish at Randalstown in 1959.
SCULLION CUP WINNERS 2546
Standing in the middle and so proud is Hubert Crossan back in 1985.
The reason being is son Damien on the and Mr Letters on the right have just been persented
with the Scullion Pairs Winners Cup, well done lads. 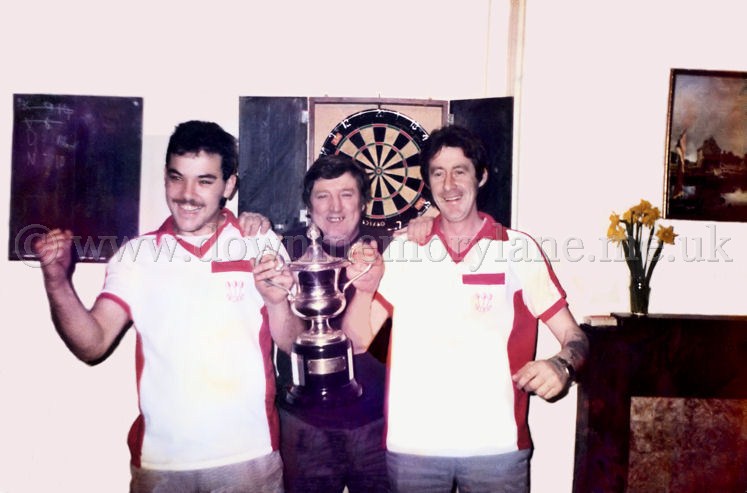 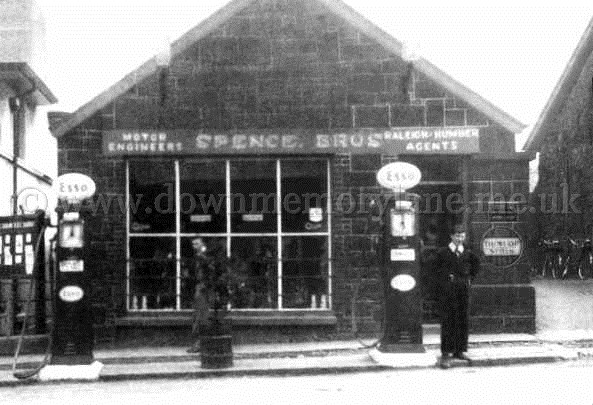 SCOUTS 2530
Well here we are at the 'Den' (the old Tennis club Pavillion) in Dunmore Park which is in the estate of Shane's Castle back in 1947.
These proud lads are some of 1st Randalstown Scout Group and from the left are Jim Clarke, Hall Graham, Willy Mawhinney, Tom Smith, B Mawhinney, Cyril Scott, Brian Waddell, Sam Scott, Pat Gardner, Laurence Graham and James Maxwell.
SCOUTS 2531
Now this what scouting was all about back in the 1940's here in the camp at Tipperary Woods Newcastle. It's morning time here and these lads are having a wash before breakfast in the Shimna River, lovely and cold and refreshing. The lad standing at the back is Eddie Reid but the other two are unknown at the moment unless you know them, let me know please.
SPENCE BROTHERS' PETROL STATION 1405
This is the Spence Brothers' petrol station which was on New Street next to the police station which was on it's left. Established in 1930 they also sold Cycles and repaired cars. Other businesses included taxis, funeral furnishers, Auctioneers, Valuation specialists and also sold guns and ammunition. The lad at the pumps is unknown also so is the price of petrol back then. I wonder what looks like to me a Christmas tree in between the pumps doing there? 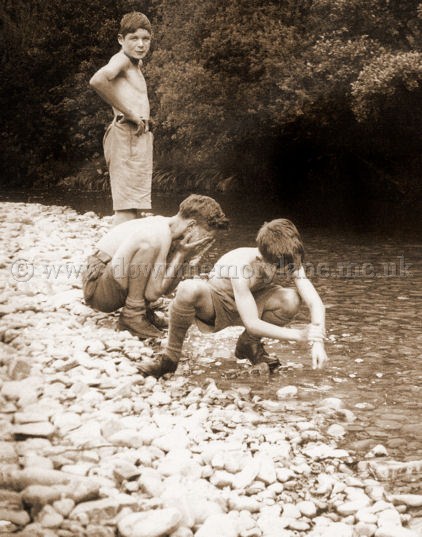 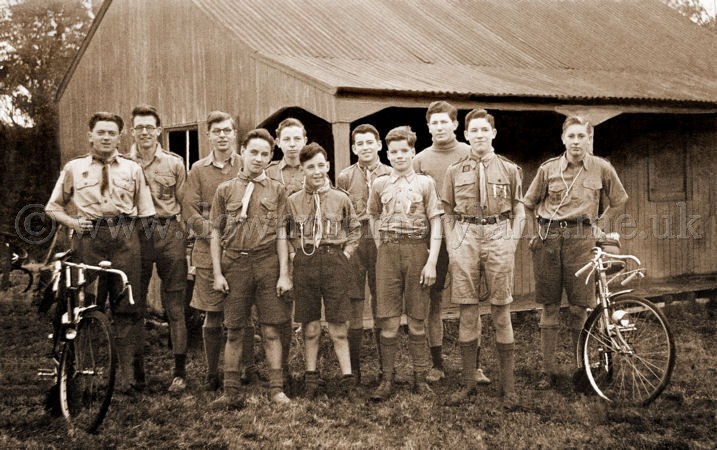 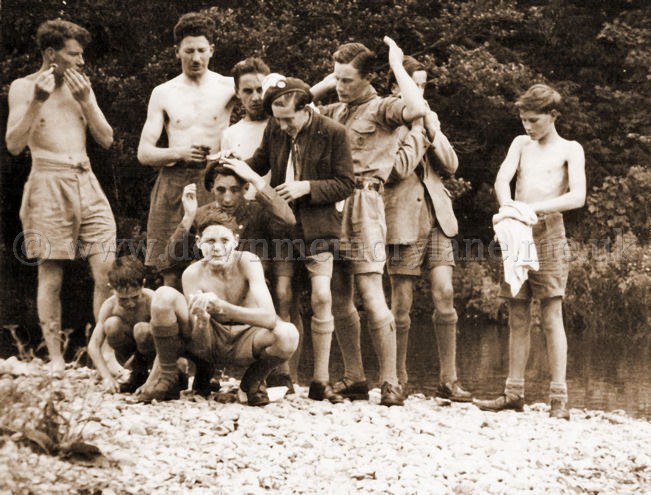 SCOUTS 2533
Up with the Larks and getting washed,shaved and whatever beside the Shimna river before having breakfast here at the Scout camp in the Tipperary woods.
At the back we have Mr Curry, Pat Gardner, Tom Smyth, Curtis Weir, Sidney Stewart, Unknown and Unknown. In front are Cyril Scott  and with his face all soap is Eddie Reid.
SCOUTS 2535
It's the 1940's and here we are in the grounds of Hollybrook House, which is in Randalstown and is the home of the Webb family
In the back row are  Willie Millar, Unknown, Mr Webb, Jimmy Hume, Harry Graham, Unknown and Unknown. Included in the photo but I'm not sure where they are, are Sammy Stewart, Philip Houston, Hall Graham, Bertie Johnston, Master McNally, Arthur Smith and Nat Drennan.
Now if you know the Unknowns and the places where the boys are, please let know.

ST OLCAN FOOTBALL TEAM 3079
This is St. Olcan's High School, Randalstown football team in 1964, the cup is unknown.
At the back on from the left are Francis Devlin, Des Denvir, Pat McNally, Francis Duffin, Martin McCann, Johnny Marron, Billy Butcher, Freddie Dumigan, Charlie Maguire and Eamom Murray.
Seated in front are Jackie McGuckian, Dessie McAteer, Pat McCorley Pat Storey (Capt), Martin Smyth, Dan Allen and Seamus Dougan
St.Olcan's High School Randalstown opened in 1958 but in 2006 it was combined with St. Malachy's High School to become St Benedict's College.
The above information was given to me by Pat Storey. 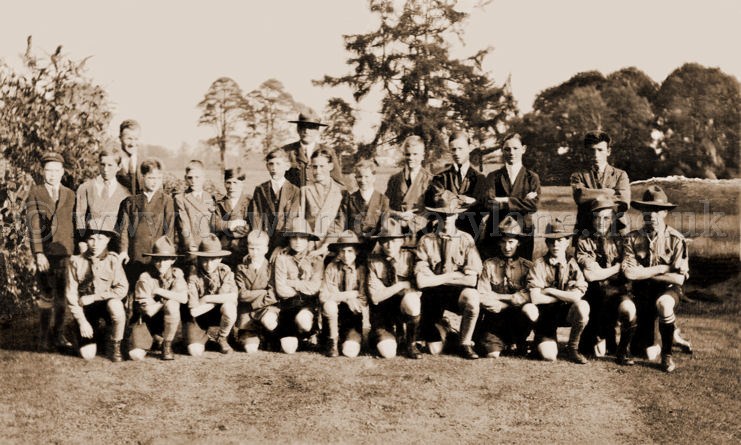 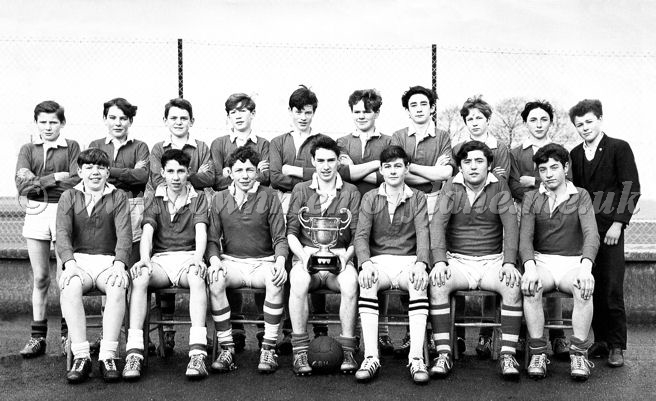 SUNDAY DANDER 1900
Out for a dander on a Sunday in Randalstown and perhaps hoping to click with some lucky lassie, the lads stopped to have their photograph taken, On the left is Bobby Heatley, then Dermot Letters, towering above them all as he would do in later years in the political arena is Bobby Loughran who became Lord Mayor of Antrim and finally Danny Letters. 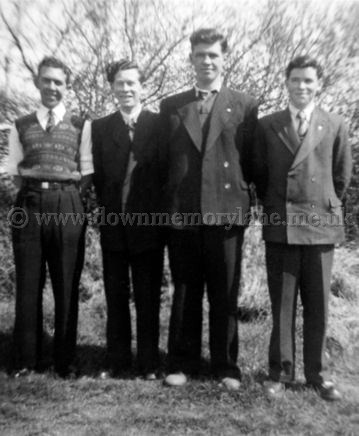 MARY SCULLION 3264
This is Mary Scullion who from an early age started to play the violin and as you can see Mary here in 1916 never got tired of playing the violin.
Apparently Mary's playing was so beautiful that she emigrated to America. This by the way is not a photograph but a chalk drawing on hardboard. 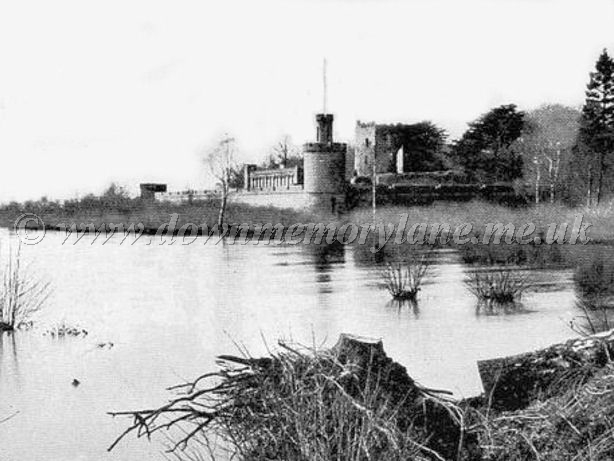 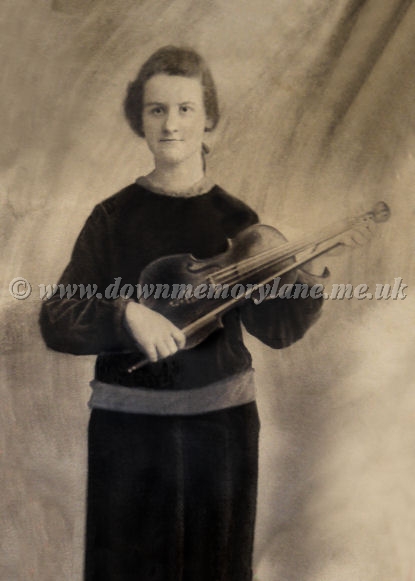 THE SCULLIONS 3259
Looking very smartly dressed we have Tommy Scullion and his lovely wife Molly Scullion.
Now if anyone knows more about them please let me know. 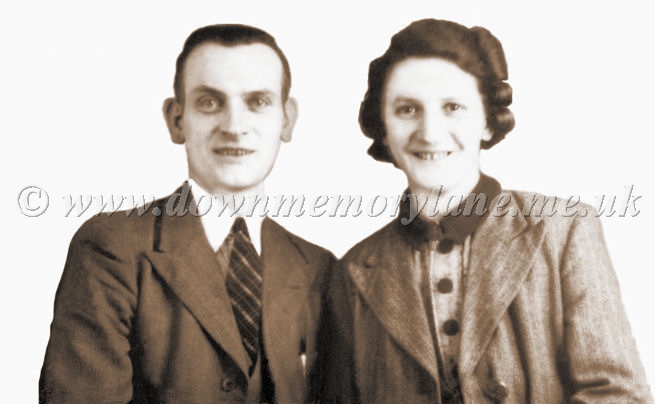 THE SCULLIONS 3262
Sitting in a studio having their photograph back in 1913 just one year before war erupted in Europe. This is Eward Scullion and his wife Margaret Scullion. 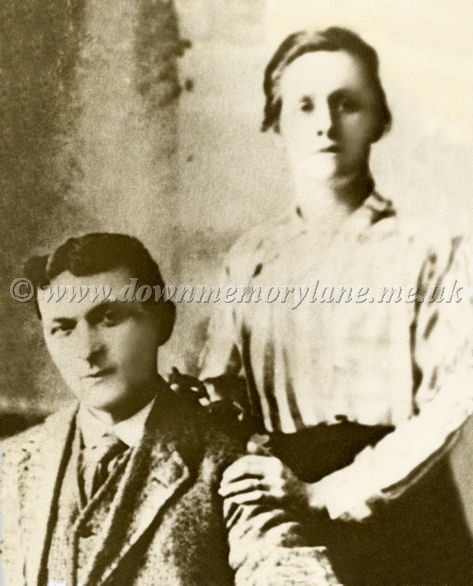 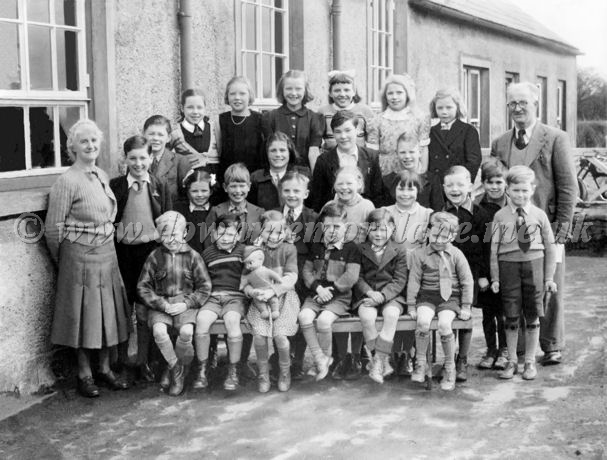 SHANES CASTLE PRIMARY SCHOOL 3308
Here we are with another school photos so I need you to get your heads together and sort out the names as to where they are in the photograph plus if you know anymore names. It is Shane's Castle Primary Schoollwith the class of 1951 being recorded for prosperity.
The headmaster was Mr McKitterick and he lived lived in the school house, the lady teacher is Unknown.
Standing at the extreme right in the second row is Robin Holmes proudly showing off his tie. His brother seated in front of him is wearing one also, what is so special about the ties is that they came from an uncle in America and has an Indian's head hand painted on them.
Now elsewhere in the photograph are the following pupils: Doris and Elda McDonald whose daddy is a local farmer, Charlie and Margaret Smith, Bobby and Pauline Cupples. 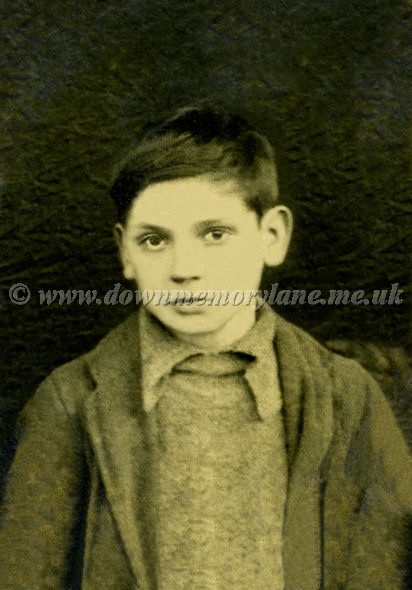 TOMMY SCULLION 3318
Once more we have the good old school photograph where the photographer just seemed to appear and take them and of course us boys did not put on
nice clothes to to school like the girls did. This is a young Tommy Scullion having his photograph taken and it was not during the summer. 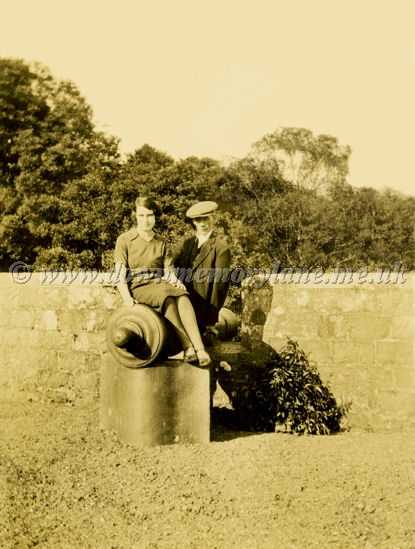 SHANES CASTLE 3431
Here at Shanes Castle in Randalstown in July 1931 we are looking at the castle walls where the cannon are situated looking out over Lough Neagh where many naval battles were fought. Now perched quite happily on one of the cannons is 16 year old Sally Gillan looking very pretty. While behind her holding her safely is her Uncle Dan Magill. 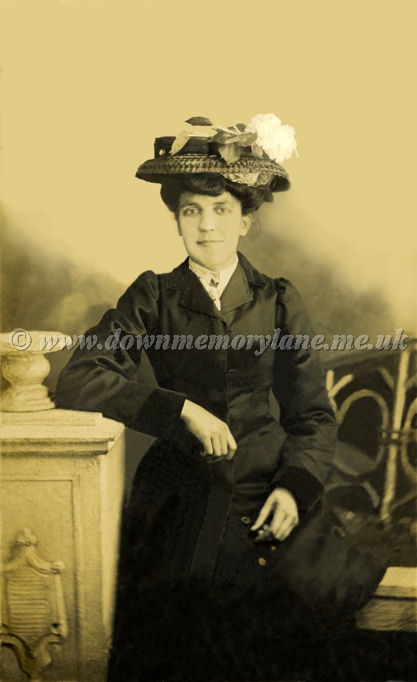 LIZZIE SKELTON 3432
All smiles for the camera in all her refinery is Lizzie Skelton from Randalstown back in 1920. Lizzie had travelled from Randalstown to Belfast to the studio of C. Christopher at 112, Royal Avenue and looking at the photograph it was well worth it. 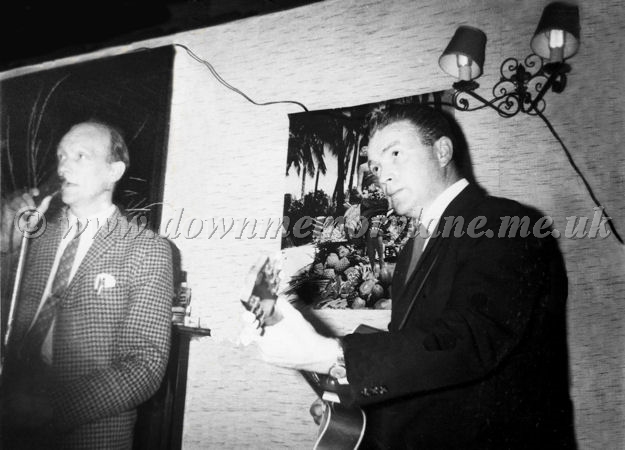 SINGERS OF THE SIXTIES 3434
Here singing in the clubs and bars in the sixties on the left singing his heart out is Davy Graham while playing the guitar is Joe Herbison.
SHANE'S CASTLE 3579
Last week the Antrim Guardian carried a feature on the links between Sane's Castle and Ian Fleming, the creator of James Bond - so what better time to run this striking portrait of the grand old building? This picture was taken before the levels of Lough Neagh were lowered, but it's all the more dramatic to see the ancient walls rising from the water.