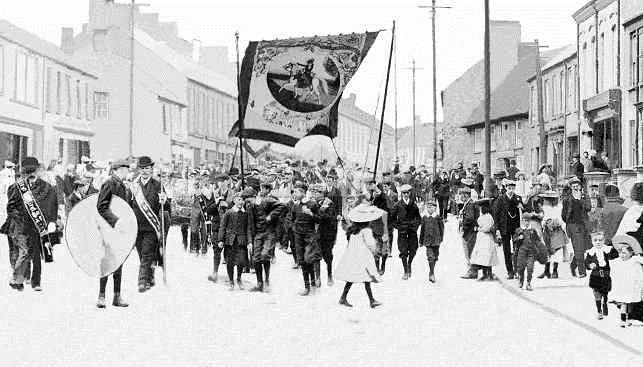 PARADE 1170
Standing in Main Street Randalstown the parade is all set to march off, the year is unknown.
Everyone out in all their finest and mothers back then had some washing to do when you consider not only the men with white collars but the boys as well.
Over to the right is a little boy and probably his sister with him looking at the camera. Just look at the lace collar he is wearing and also the belt and buckle. 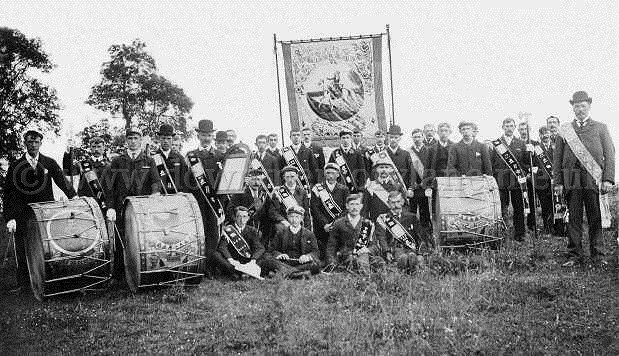 PURPLE STAR 1233
This is the Purple Star L.O.L No.941 posing for the camera in Randalstown.
The only person known is at the back in the centre underneath the banner Robert Woods, when it was taken is unknown. 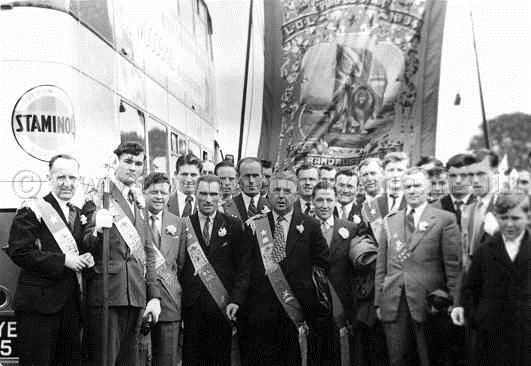 PURPLE STAR L.O.L. 1235
These are the members of the Purple Star Lodge in Randalstown getting ready to board the bus, the year is unknown. On the left is Bill McIlroy, Unknown, Mr.Lyttle, Harry Rainey,unknown, Gill King & Unknown.
The next row has Mr Stewart, Mr Johnston, George Wood Basil French and Sydney Scott, the rest of the members are unknown. 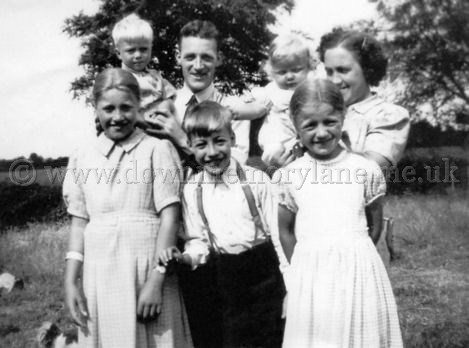 PORTGLENONE ROAD 1822
Getting their photograph taken out on the Portglenone road in Randalstown in 1949 we have the Coulter family.
At the back (from the left) are Stanley Coulter in his daddy's arms William Coulter, then John Coulter in his mum's arms Agnes Coulter.
In front are Margaret Coulter, Tommy Coulter and finally our very own Isobel Coulter. 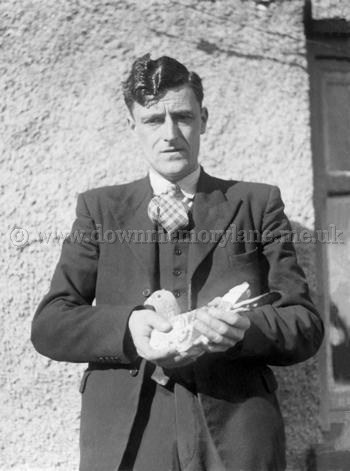 PIGEON RACER 1287
Here we have standing outside his home at Ballylurgan Randalstown is Billy John Bell.
Billy is seen here holding one of his famous racing pigeons and I have been told that he was the best racer of pigeons in Randalstown in his time.
PARADE GROUND 2220
This is Sarah Anne Harper in the late 1930's, who as a young child was sent here to Parade Ground at Randalstown to be brought up by the Seymours
who were relations. Her family lived on the Horseshoe, at the Cave Hill. Her father William Harper, was a blacksmith who did work for the Belfast Trams.
They originated in Magheralane (up the lonen where the old Magheralane Schoolhouse was) they are buried in the Drumhaul Cemetery just outside of Randalstown, down the bottom of the Coolsythe road. The Seymour's, who were her mother's people were from the Randalstown, from Seymour's Bridge right next to the old school house which still stands. 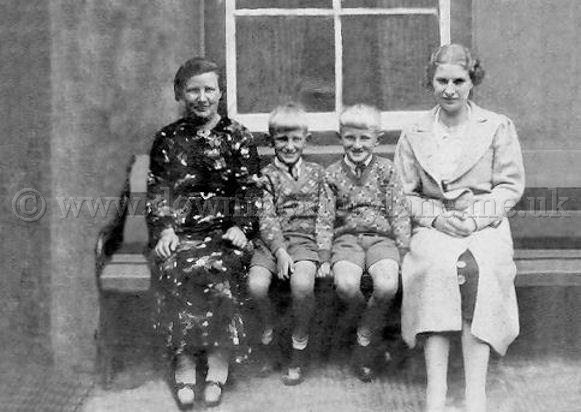 PARADE GROUND 2260
Here at her home at Parade Ground Ranadalstown in the late 1930's is Sarah Seymour on the left sitting with two unknown boys, then Margaret Irene Harper.
Sarah lived here with her sisters and brothers and they all worked at the Old Bleach and one of them was a master designer.
Their house was the second one from the railway side. 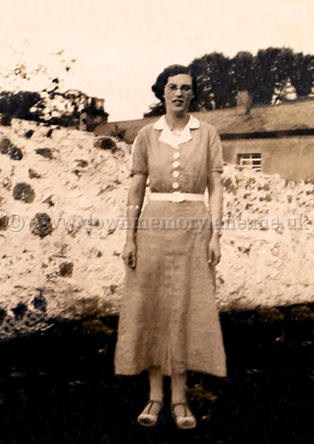 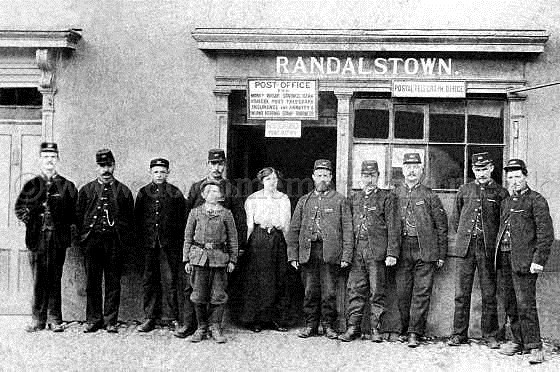 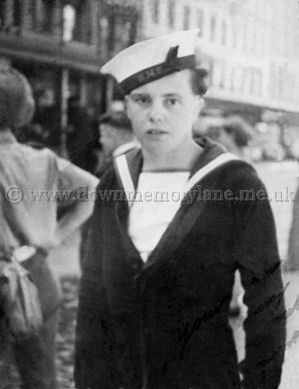 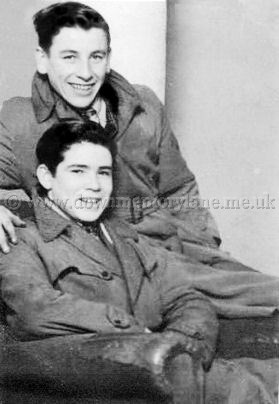 POST OFFICE 1401
This is Randalstown Post Office in lower Main Street in 1910, but was first there in 1863 and is still there. When it first opened John Stevenson was appointed Postmaster and later his daughter Matilda took over as Postmistress in 1900 for 19 years. The photograph shows all the postmen who delivered the mail not only to the locals but also all the surrounding rural areas. On the left we have John Givens, Sam Crowe, Unknown, Dan McAteer, Miss Matilda Stevenson the postmistress, Thomas Givens, George McIlroy, Peter McLaughlin, Samuel Carson and Bernard McCann. The young telegraph
messenger boy in front is David Givens.
ALVIN PEARSON 2016
This is Alvin Pearson having his photograph taken by a street photographer during the 1940's.
Alvin wrote something on the photograph but sadly it cannot be made out.
PALS 1658
All set for a night out in Randalstown we have have Dan Dobbin and Danny Letters.
This was the dress code back then in 1952 even if you were going to a dance. 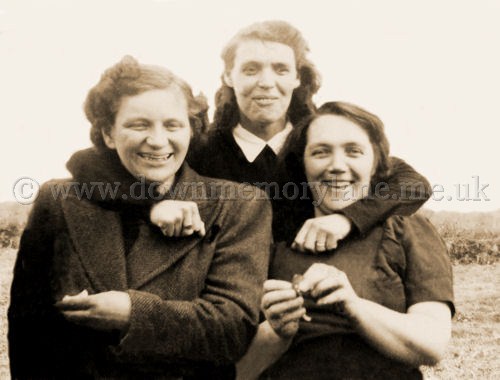 PALS 2025
These great pals out for a walk were inseparable as you can see.
At the back is Elsie Rea.with her arms round her pals on the left Helen Caldwell nee Rea and Molly McCaughey nee McIlvenna. 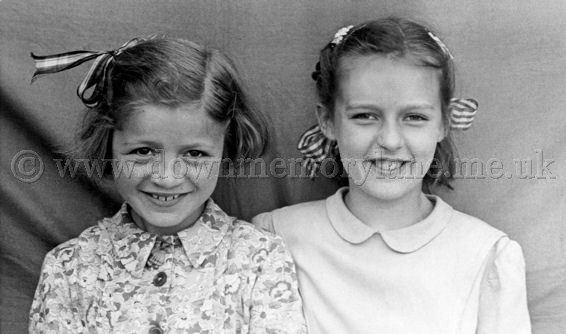 PALS SCHOOL PHOTOGRAPH 1920
Getting their school photograph taken in 1950 are Isabel Coulter and Anne French.
With pretty bows in their hair and Isobel's lovely flowered dress with a little Dutch lady brooch, they lived at Portglenone Road in Randalstown. 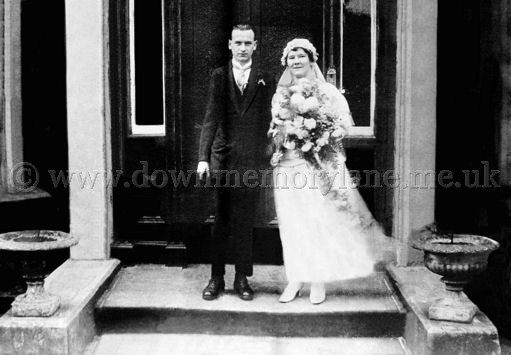 PATTERSON WEDDING 1612
Standing getting a photograph taken of their Wedding Day on the 28th November 1922.
We have the groom John Alexander Patterson and his beautiful Bride Elizabeth McCabe. 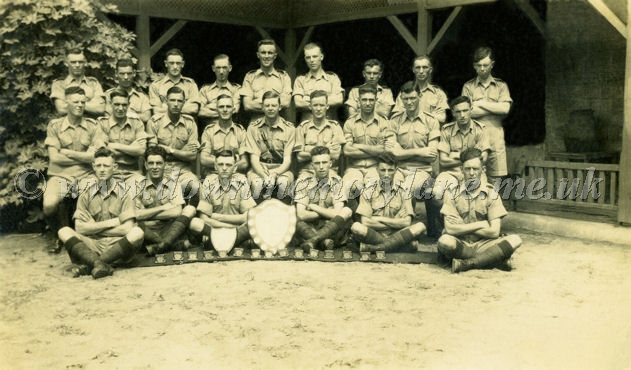 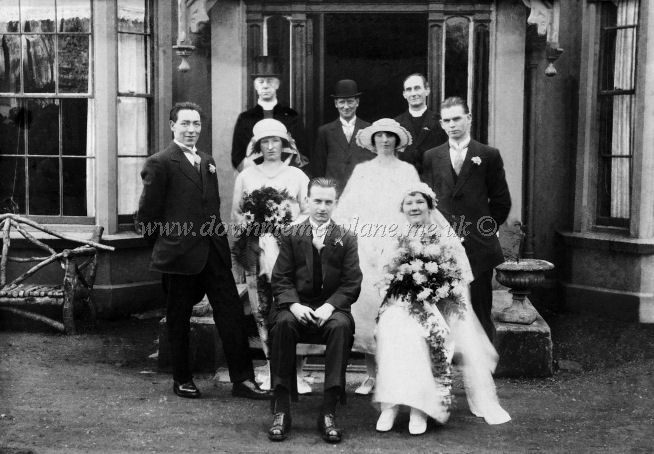 PATTERSON WEDDING 1634
Here after their wedding on the 28th November 1922 is Groom John Patterson and his Bride Elizabeth McCabe.
At the back on the left is Dean Collis, with Jimmy McCabe and the minister is unknown. In the middle are Young Jimmy McCabe, Unknown, Unknown and the Groom's brother Bobby Patterson.
Index