JANE ORR 2998
Having her photograph taken in a studio is Miss Jane Orr from Lisnevenagh, Randalstown. 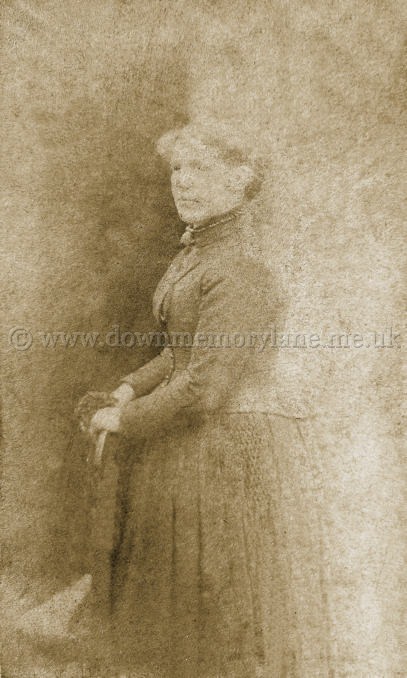 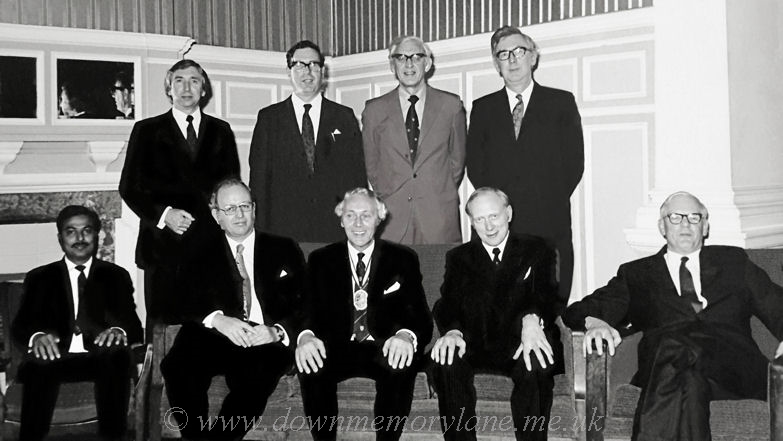 FELLOWSHIP FOR DYING and FINISHING AWARDS 3722
Seated in the middle of his Fellowship companions is Mr I. W. Reynolds. BA. BSc.FSDC. C.Col proudly and smiling and wearing his accquried award.
Mr Reynolds at that time worked for the Old Bleach Linen Factory in Randalstown. 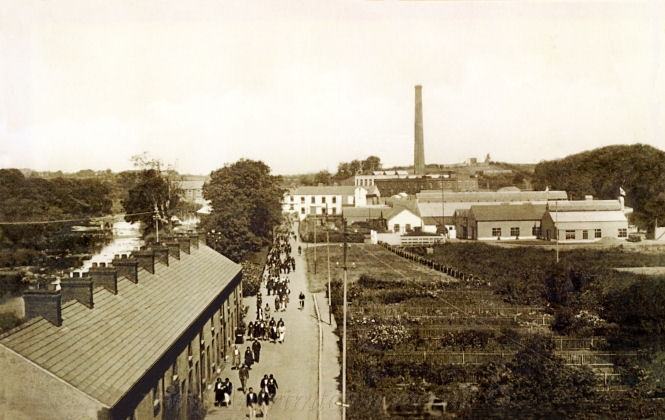 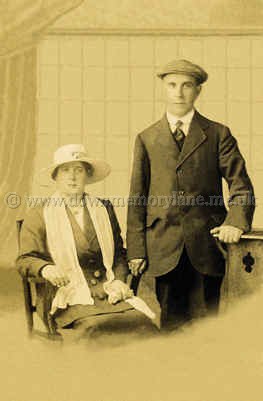 O'HEILLS 1879
Having their portrait taken are Mary Ann O'Neill and her husband John Henry O'Neill.

OLD BLEACH Co.Ltd 3565
Here in the Old Bleach linen mill in 1938 it be either during the summer after shift has ended, Saturday afternoon or a Sunday for the light is pouring through the skylights. The looms in the foreground are weaving linen sheeting while on the next loom were maintance work is being carried out and also behind the man.
Look closely under the loom in the foreground where lumps of fluff has gathered. 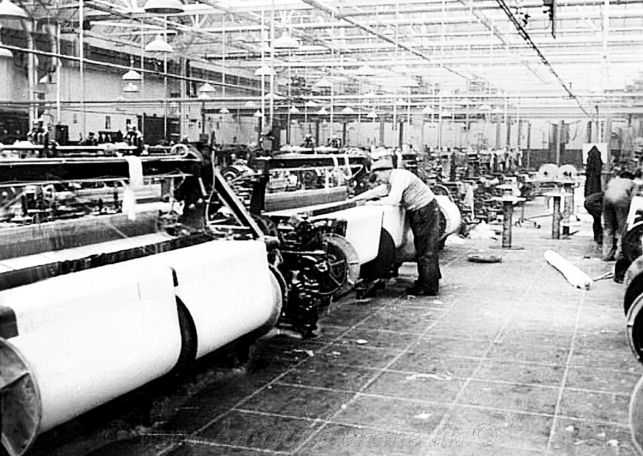 OLD BLEACH Co.Ltd 3727
July 1931, it's a Saturday around 1.15pm, the employees are not only enjoying the fresh air and sun walking home but they have the rest of the day off and Sunday.
At the top of the hill in the background is the manager's house and in front with it's imposing tall Chimney and various buildings is the Old Bleach Mill.
The houses to your left next to the Maine river are owned by the mill and let out to the employees. Who along with a nice house and not far to walk to the mill but across the road they each have their own gardens, some are growing flowers but mostly it's vegetables for the pot. 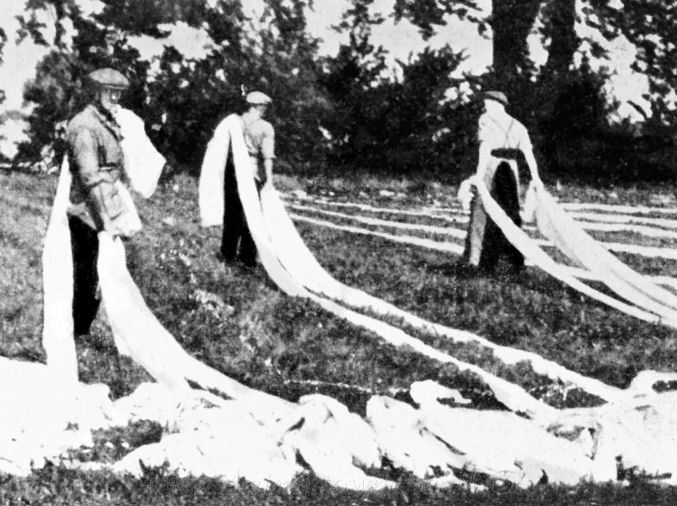 OLD BLEACH Co.Ltd 3726
Here the men of the Old bleach are laying out the linen in strips as they have already done to the right on the grass fields known as the green. The reason they are doing this is to let the sun bleach the linen white, using this method makes the linen much stronger and last longer than methods using bleaching chemicals back then which were quicker but weakened the linen. I remember as a lad seeing the linen laid out like this but back then we had summers. 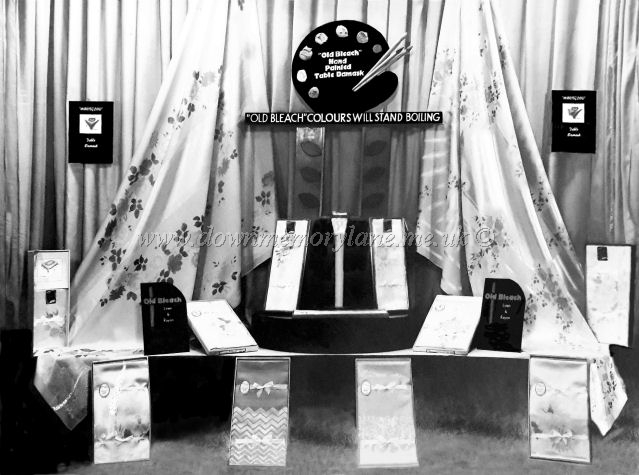 OLD BLEACH LINEN Co Ltd WINDOW DISPLAY 3723
Although taken many years ago it would not look out of fashion in today's shop windows. The Old Bleach Linen Co Ltd goods were known not only locally but world wide and their tablecloths graced all of the Royal Palaces. The linen was made without any chemicals it was streched out in reams in the fields to let the sun bleach it naturally, this gave it its sheen and softness. This was the reason it was eagerly sought after by French Couturiers. In a French newspaper called The Border Cities Star and dated Dec 26 1934 it stated “It appears that next Spring will find us wearing Irish Old Bleach Linen for street dresses, evening gowns, morning frocks and cocktail ensembles” It was said that the large parcels of linen, from the nearby Old Bleaching Company linen mill, were stacked to the ceiling at the post office.The linen made its way from the mill to the railway station on an electric lorry and on to destinations all over the world. It was only when cheaper foreign goods came in they could not compete and the firm sadly closed in 1980. 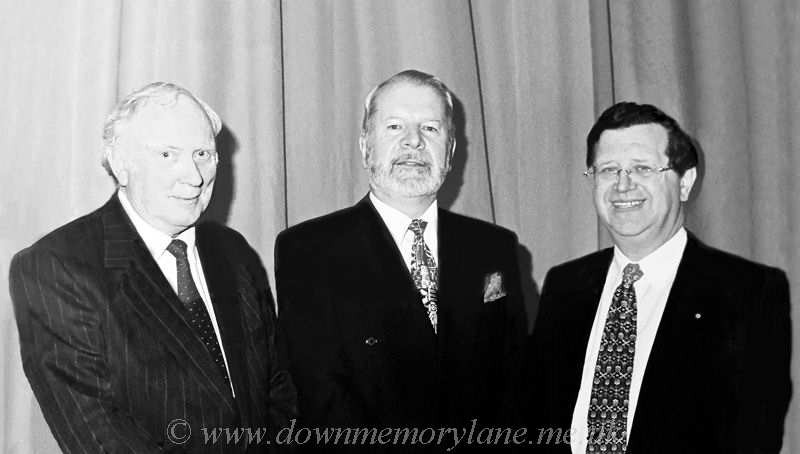 FRIENDS 3724
It's nice to meet up with old friends and these three are no exception having met up at a convention.
They are from the left Ivor Reynolds BA. BSc.FSDC. C.Co then Ian McKay who owned a pharmaceutical shop in Magerafelt and finally Jan de Vries, a well known herbalist in Northern Ireland and had a shop on the Lisburn Road. 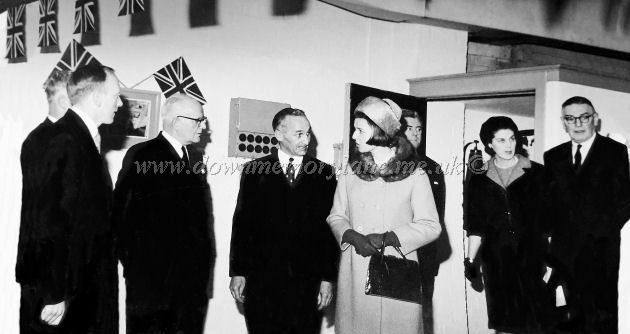 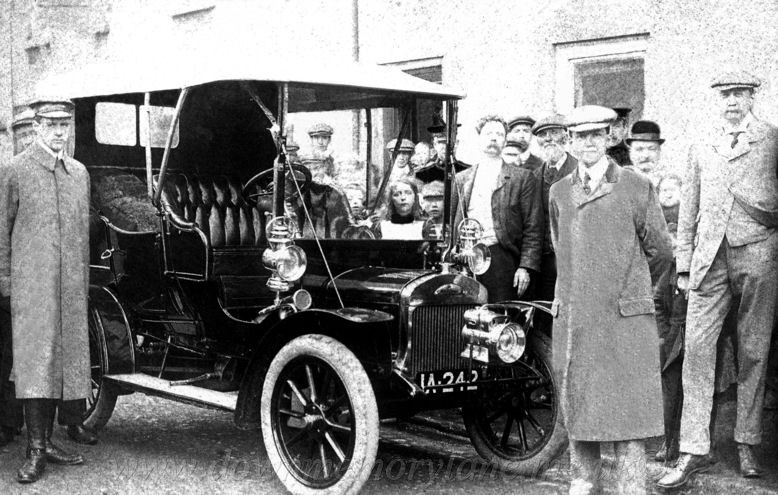 LORD O'NEILL 659
Standing in front of his car in Randalstown is Arthur O'Neil who sadly was killed in action during the First World War. At the side of his car is his chauffeur and, as you can see quite a crowd gathered - including two police officers! The reason for this may have been that cars were still a novelty in 1911 when this picture was taken. Certainly the solid rubber tyres would have made for a bumpy ride.
Index