QUAYSIDE at DROGHEDA 3762
Here we are at the Quayside in Drogheda and all the old sailing ships showing their rigging and the sails all tied up. On the side of the first ship which is named the "FYNE"you can see the size of the anchor and on the wall looking over at it are three young boys looking at it and probably dreaming of sailing the high seas. At all the ships they have a small rowing boat. Can anyone tell me why they are not tied up at the quayside? From halfway along the quayside are loads of men with their carts stretching as far as the Boyne Railway Viaduct. As you can see the street pavements are all cobbles must have been hard to walk on, perhaps that's why the bowler hatted man near the corner on the right is standing on the pavement edging. Over to the left at number three is Kennedy the Grocer but the three floors above the shop he has turned into a hotel which he has called the "Railway Hotel." Outside the shop stands a man with a pony and trap, perhaps hoping to take some of the guests on a sight seeing trip. Moving down from him is a horse and cart with goods that he is delivering to the shop in front of him which is also a grocers owned by 'Anne Butterly.' and the delivery man is wearing a top hat! Next door is the 'Coalstores', the following shop is unknown as is the grand looking building next to it. Now at the Unknown shop you can see two carts with donkeys and that part of the pavement is barricaded off. Next to it is a ladder which if you follow it up there is a man repairing the slates on the roof and nothing to save him from falling, no Health & Safety back then! 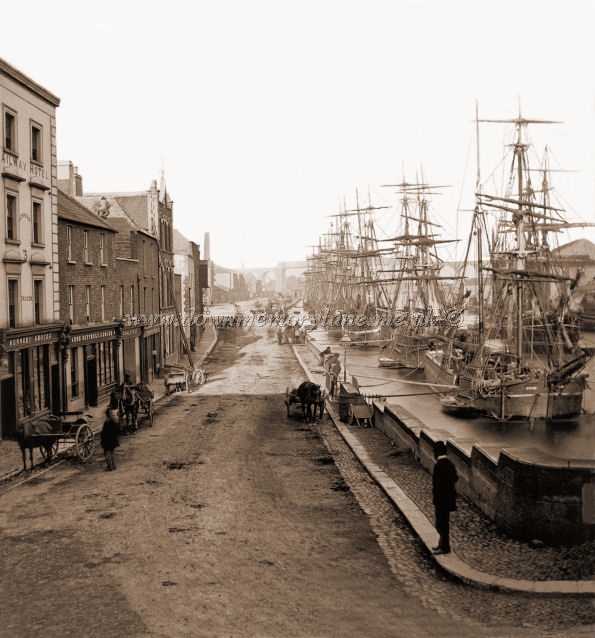