BALLYCRAIGY MANOR 3225
Standing in front of Ballycraigy Manor back in 1926 is Mary Casey. Now either side of the step
Mary is standing on you can see the boot scrapers for cleaning your boots and shoes for the pathways and roads were not like of today.

BALLYCRAIGY MANOR 3227
Sitting and relaxing in the morning sun outside Ballycraigy Manor in 1900 we have Louis and Bernard Meenan.
Bernard is sitting reading a letter and smoking a cigar has on riding boots so could be going horse riding. While Louis's footwear is designed for hiking or walking, perhaps he's taking the dog on his lap and the one on the ground beside him which looks eager to be off for a run. 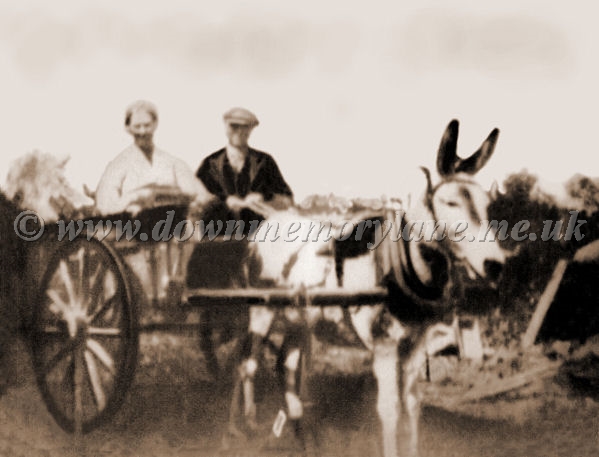 BASTONS 3350
These are the Baston's who lived in Magherafelt around Lough Neagh in 1863, yes this photograph was taken 150 years ago no wonder it is slightly blurred.
Now Paddy Baston who originally came from Scotland was a fisherman and his wife Mary Baston nee McCartney came from Ballymaguigan which is a hamlet and town land in County Londonderry. It is near the northwest shore of Lough Neagh and close to Magherafelt. This where Paddy did his fishing on Lough Neagh catching brown Trout, Dollaghan and Pollan a white fish. Here they are at what must be one of their stopping spots for the locals to come and buy their fish and by the empty boxes behind the donkey they seem to be doing very well.
BARBICAN GATE 3486
This is the Barbican Gate which was the entrance to Antrim Castle which you can see over the top of the castle wall. It looks to me that it must probable be a Sunday for except for the two boys there is also no one else to be seen, also by the shadows caused by the sun it was eary morning. The two little boys could be from the gate keepers home which was above the gate where you can see the windows and at the back behind the towers you can see the chimney of their home.

BROWN - 881
Here we have all dressed up in the back garden and nowhere to go as if they would dare - is Eddie Brown and his wife Nan Brown.
Or is it the other way round!

MATTHEW BOYD 614
The two lads were in the Royal Enniskillen Fusiliers and were stationed at Dungannon, the photo taken just before the start of the Second World War.
The sergeant on the right is unknown but the lad on the left is Matthew Boyd from Antrim. Matthew was a driver and sadly died in a military convoy in England shortly after the beginning of the War. He is still fondly remembered by Billy Elliott who recalls Matthew taking him to the cinema in his youth in Dungannon. When you think about it such a lot of promising lives were lost too soon.

P.O.W. POSTCARD 775 and 775a
This is the first information that William Bain of the Gordon Highlanders on the 17th November 1940 was able to send to wife to let her
know where he was and that he was safe and well after being captured. Later on William along with fellow prisoners dug a tunnel
and escaped only to be recaptured a few days later but two avoided capture and made it back to England.

SPA TERRACE 304
Here next to the lorry in the 1930's the man is unknown, then Annie Baird, Ruby Baird and seated in the truck is James Baird. Date is unknown.

STEEPLE GROUNDS 448
This was taken in the grounds of the Steeple estate beside the Tennis Courts.
Here we have Peggy and Samuel Beresford with their mother Sarah Beresford in 1927.

STEEPLE HOUSE 438
Enjoying the sunshine at the side of Steeple House is Sarah Beresford, Lily Beresford and sitting on the bonnet of the car is Jeannie Beresford who later married a Wallace.

STEEPLE HOUSE 440
This is the front of Steeple House on the 10th August 1930. it was then owned by Major Clarke.
Seated on the grass is Lily, Samuel in his cowboy outfit and Peggy Beresford.
STEEPLE HOUSE ESTATE 441
This was taken at the Front Lodge gate in 1930.
This is Peggy and Jeannie Beresford with their Grandparents Sarah and Samuel Beresford.
To the left of them you can see a discarded plant pot with a fern in it.

ELLIE BROWN 877
Standing at the back of the yard of Renton's shop which was on High Street, is Ellie Brown next to the Sixmilewater River. Their wall must have fallen down for they have made a makeshift wall while the rest of it is the river. Behind Ellie you can see the ruins of a cottage and the houses in Riverside - the year is unknown.
RAF 2041
These two fine young men enjoying the summer's day are RAF maintainence crew, the patch on their sleeves denotes that they are between a leading aircraftman and a senior aircraftman technician.
The one on the left is unknown but the chap on the right is Dennis Butterfield who married a Randalstown lass.

ROBERT BROWN 941
At eight minutes to nine at night on the 7th November 1956 we have Robert Brown of New Lodge Road, Muckamore.
Robert apparently was a great fiddler and when he started playing not only could you not get him to stop but your feet as well. For he was well known throughout Antrim as the man who could make a fiddle talk! Now he just didn't play them he made them as well and his fiddles were in great demand. Just look at the old range I can remember them when I was a nipper.

RAILWAY STREET 882
This little girl standing smiling for the camera in her best dress is Emily Barr who lived in Railway Street, where this photograph was taken.
In the background you can see the chimney stack of the gasworks back in 1940.

RAILWAY STREET 883
This is our sweet Emily Barr in 1940 getting her photo taken with her pet goat who refused to give me it's name. Where Emily is, is in Railway Street and behind her ,her mum has been hard at work with the washing out on the line.
Remember all done by hand no washing machines back then!

OUT FOR A JAUNT 895
Showing friends from England the sights around Antrim and now down at the Lough Shore - we have sitting on the jaunting car behind the girl on the right is Grandad Brown from Dunadry. the year is unknown.

BIN MEN 3759
No disrespect to the hard-working refuse collectors who work the highways and byways of Antrim nowadays,but this was taken in the 1970's when bin men were real men! There were no machines to hoist the week's rubbish up into the back of the lorry back then, just raw muscle power. Suffice to say you would not want to wear your Sunday best when you were lifting aloft hundreds of leaky old metal bins every day. Pictured from left are Sam Clotworthy, the late Matt Caulfield, Francis Hamilton,(who is still with the council after an extradinary 39 years), the late Andy McClure and Jimmy Watson. The chap on the right, incidentally, is former Antrim Guardian reporter Bob Millar.
MARKET SQUARE 016
This is James Baird of Baird's undertakers in Church street photographed in the late 1930's at the side of the Court House.
If you look at the arched recesses you can see that they have iron railings this is the exercise walkway for the prisoners.