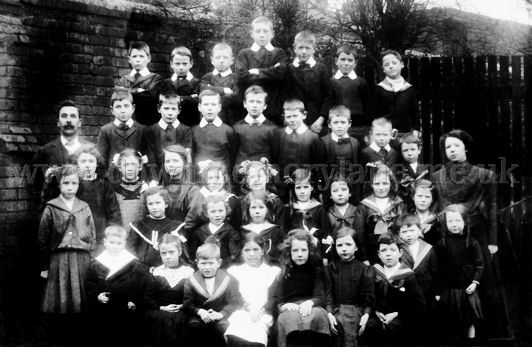 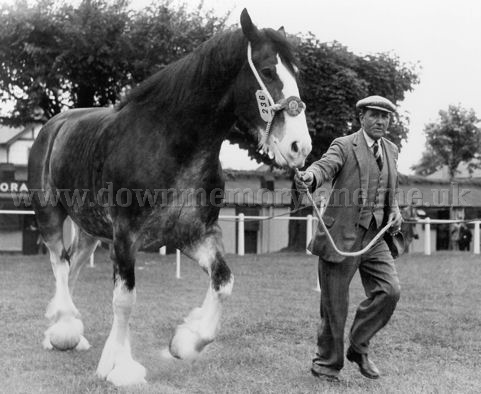 BALMORAL SHOW 1946
This is Bob Wilson owner of the Hall's Hotel at the Balmoral Show in 1964.
He had just won "Best Clydesdale" and was showing off the horse, just look how the two of them are in step with each other!

BUFA STREET SCHOOL 1637
This photograph of Bufa Street School, Antrim Road Belfast was taken in 1908.
Sadly no one is known but see how a lot of the children are wearing sailor suits and the bigger boys with their suits and white collars. 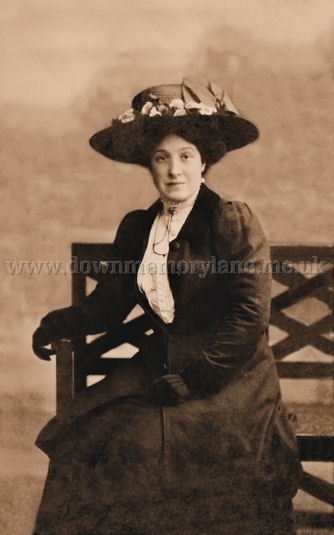 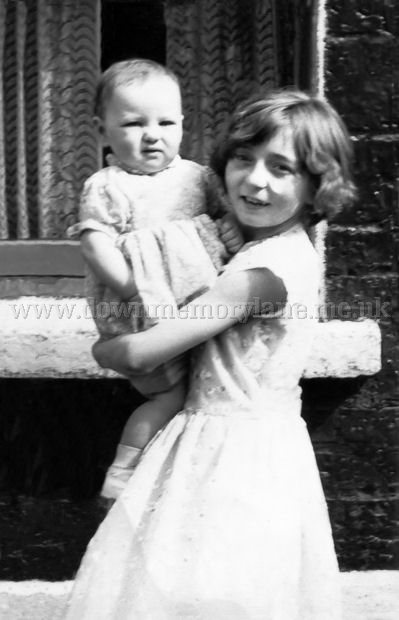 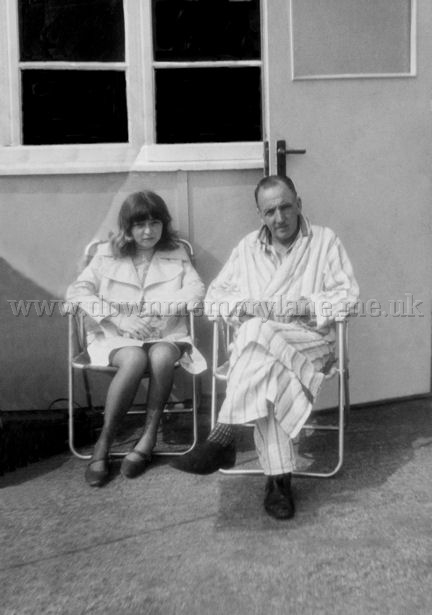 BELLA THOMPSON 2520
This is Bella Thompson whife of Sam Thompson having her photograph taken in Prince's Studio, High Street a branch of Abernethy's

MINDING 2737
This is Marie Mitchell being helpful by minding a neighbours child who is Mary Mo McBride.
Now Marie today is still being helpful behind the counter of Tesco's Customer Information. Also she still has that lovely smile and twinkle in her eye!

VISITING 2738
Sitting enjoying the sunshine while visiting her uncle Micky Collins in hospital is Marie Mitchell.
The sun was also shining down on the English because it was the 30th July 1966 and the England football team has won the World Cup. 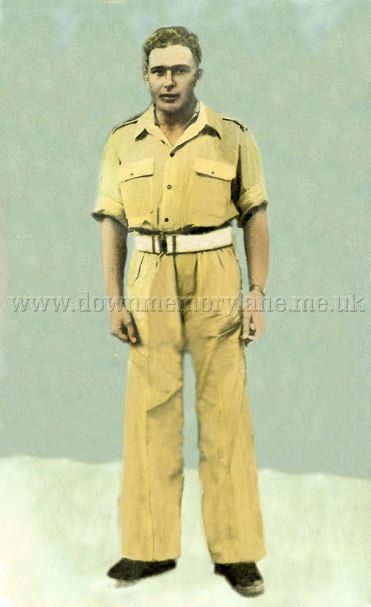 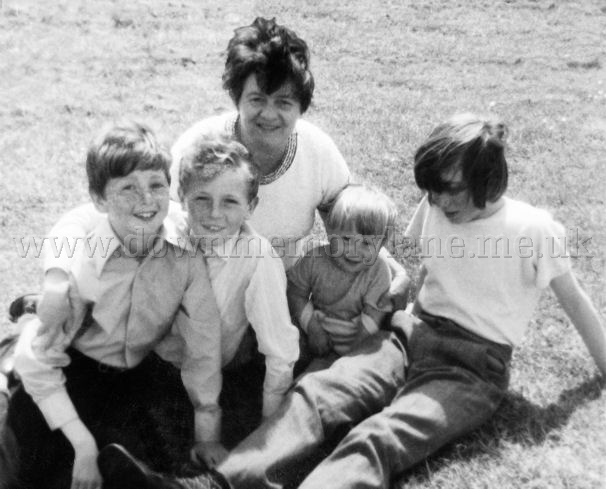 PLAYTIME 2739
As it was a sunny day Cassie Mitchell decided to her children and their friends to the park to enjoy the day while it lasts.
In fron of her from the left are Dermott McNeice, Michael Mitchell, Richard Dean and John Mitchell. 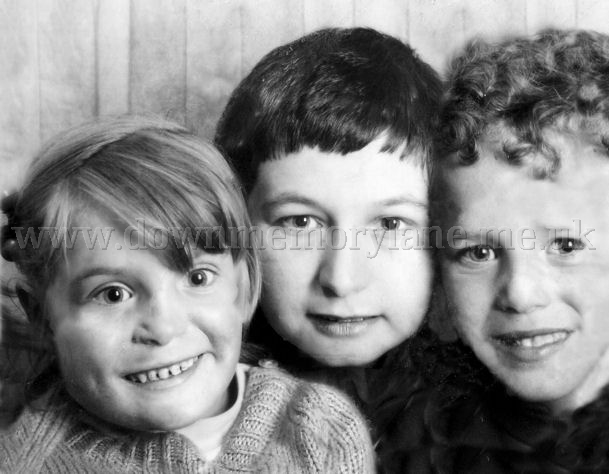 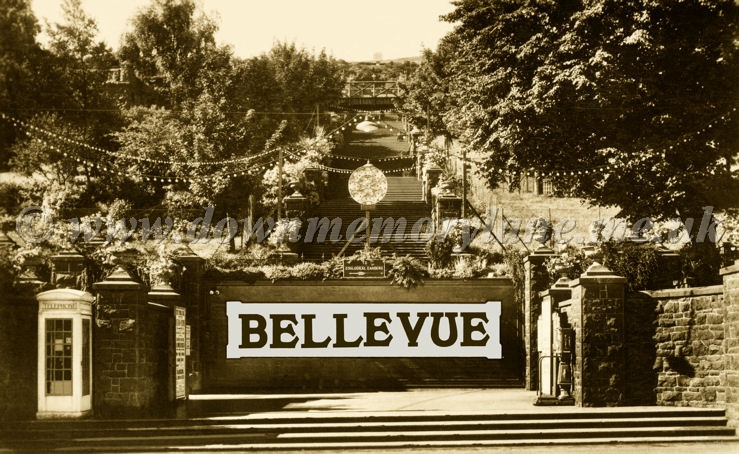 BELLVUE 3129
The reason for all the lights here at Bellevue is that it was 1935 and was the Silver Jubilee of King George V.
On the left you will wonder why the telephone box is white instead of red, that's because back then you could paint them whatever colour you liked. Just round the corner you can see a billboard, it is advertising dancing in the Floral Hall. Then opposite on the right is a weighing machine. Now there were two ways to get to Bellevue Zoo and that was by a bus with no sides to it and the road up to the zoo was like a road going up a mountain.
I loved going on the bus for when coming down the driver went very fast. The other way in is in front of you the steps and I have done it when I was young.
At each set of steps there was seating so you could have a rest. Above the steps is a walkway this took you from one side of the bridge to the other.

GREAT PALS 2741
All squeezed tight together for they were in a photo booth having their photograph taken.
We haveTina Mitchell, Richard Dean and Michael Mitchell. 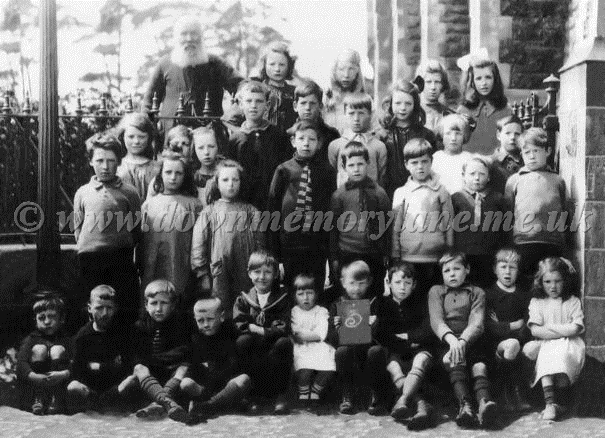 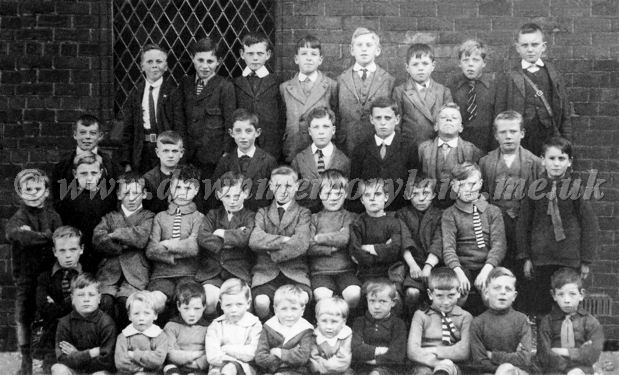 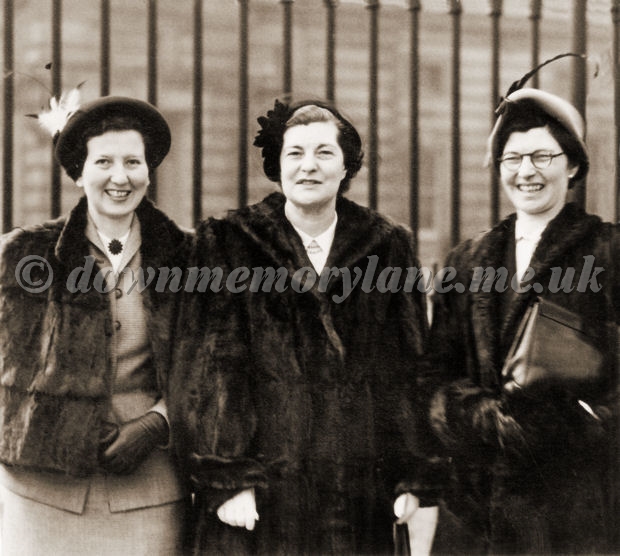 BALLYSILLAN NATIONAL SCHOOL 3397
It's 1920 and here we are at Ballysillan National School in Belfast for the pupils annual school photograph. Only three boys are known and they are in the
front row. 5th from the left is George Stevenson, next to him is his brother Jack Stevenson and 8th in the row is their other brother Jimmy Stevenson.
Now some of the boys in the front row you would think that they were too young to be at school and you would be correct. Back then if their father and
mother were working the small children could come to school as long as they had a bigger brother to look after them and of course keep them good in class.

BALLYSILLAN NATIONAL SCHOOL 3396
These are the pupils of Ballysillan National School back in 1922 and what the "3" on the slate means I do not know, If you do please let me know.
Their master standing behind them with the Santa Claus beard is called Mr. Matthew Parker, looking at I would say he was firm in his teaching but gentle.
Only two pupils are known in the class and they are in the front row, third from the left is George Stevenson and next to him his brother Jack Stevenson.
They had another brother called Jimmy who is not in the photograph, now George went on to become a sailor and emigrated to America. George's ship was in a convoy delivering supplies to us during World War Two when his ship was torpedoed and sank. George survived the sinking and also survived
floating about in the Atlantic ocean for four days before being picked up. He was very lucky for the official orders during the war where that you did not stop for survivors. Now if George was in the Merchant Navy his wages stopped the minute his ship went down and he did not start to earn money again until he was working on another ship! Jack in his adult life became an aeronautical engineer who created a trade union called the " Aeronautical Engineers Association" in 1944 when he was only 29 years old, breaking away from the T.U.C. Jack later in life turned to be a political speech writer for Bernard
Weatherill speaker of the House of Commons and M.P.'s from the three main parties concurrently. Finally Jimmy when he grew up became a Director of Social Services for Northern Ireland for witch he was awarded the M.B.E. In 1972.

AGNES BAILLIE M.B.E. 3618
Here standing outside the railing of Buckingham Palace are these three ladies.On the left Peggey Mrs. H.W. Topham is the sister of the lady in the middle.
The lady on the right is a colleague from Vienna Miss E.D. Standing. Now the lady in the middle is Agnes Baillie nee Agnes White and the reason they were
at Buckingham Palace was that Agnes had received the M.B.E. for services in Vienna as Executive Officer with the Allied Control Commission fro 1945.
The date was the 28th February 1951. 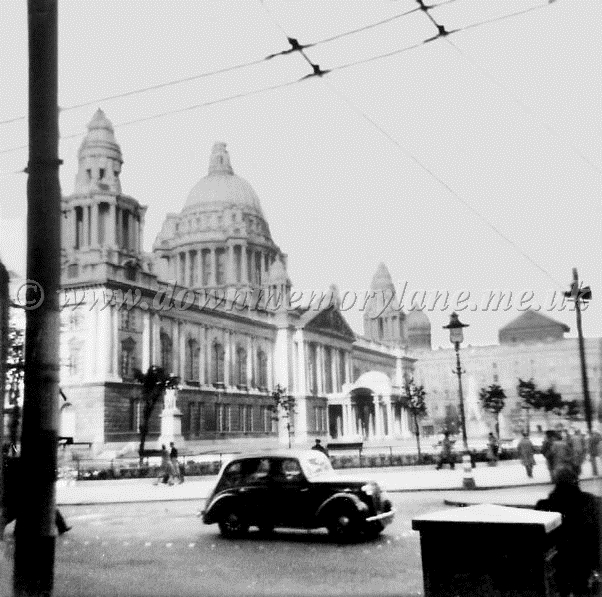 BELFAST 3471
Here we are in the heart of Belfast looking over at the City Hall and in the sky above you can see the trolleybus overhead lines.
It's early morning yet only 7.30am in the morning of the 5th June 1948 and the people you can see could possibly be shop assistances for is was Saturday.