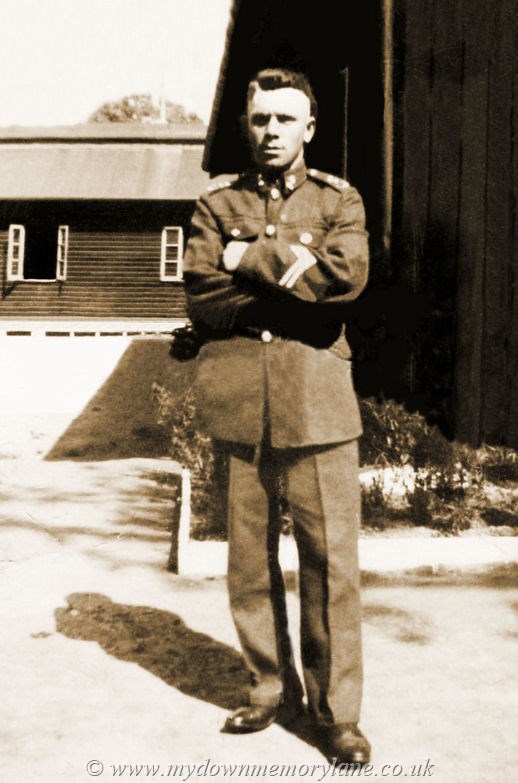 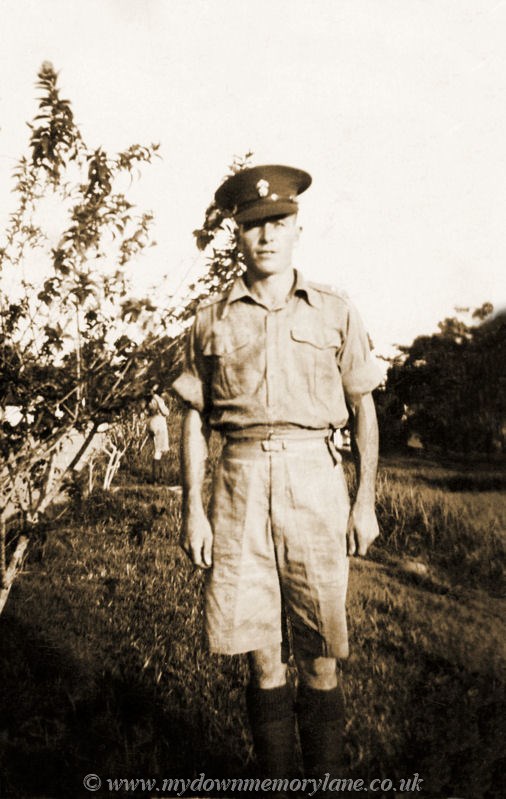 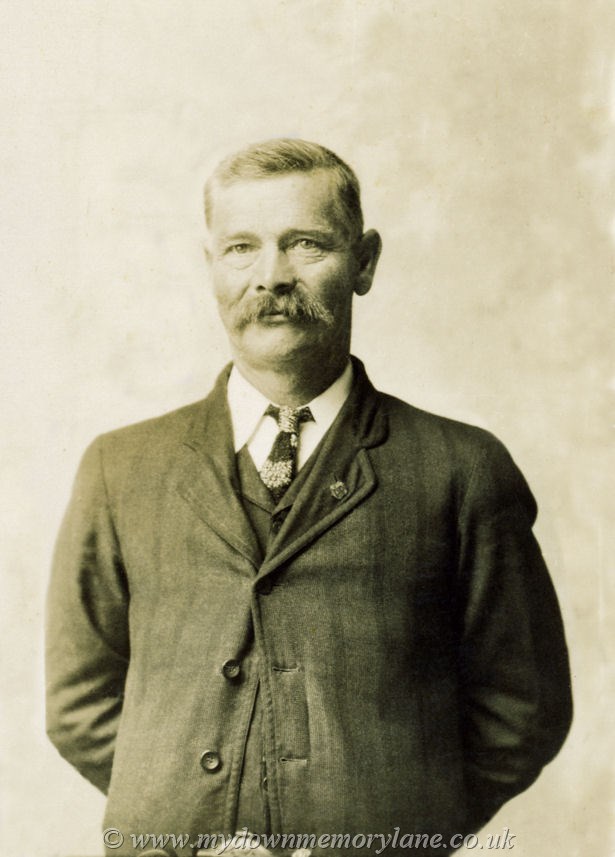 HARRY CAMPBELL3369
Here in uniform with shorts gives you a clue that Harry Campbell was overseas, the reason we do not know where is because it was war time in the 1940's.
The 5th Division of the Royal Inniskilling Fusiliers faced the Gustav Line on the Adriatic coast which guarded the approach to Rome in the Garigliano Valley. A silent night attack across the river was planned for the night of 17 Jan 1944, but in spite of the assault was was opposedimpeccable planning ,and very heavy casualties were sustained. The Battalion did not finally achieve its objective until 2 days later. "The Irish deserved special mention in
the history of the Italian campaign for the part they took in the Garigliano battle and for being the first Allied unit to breach the Gustav Line".
Victory in breaching the Gustav Line meant success for the Anzio landings and the Liberation of Rome.
Then in March 1944, Harry Campbell and his comrades of the 2nd Inniskillings embarked for the Anzio landings.

HARRY CAMPBELL 3368
This is Corporal Harry Campbell who was in the 2nd Royal Inniskilling Fusiliers and served in the African and European campaigns of the Second World War.

WILLIE CLARKE 3373
Standing straight in his three piece stripped suit with a hand knitted tie and smiling at the camera is Willie Clarke from Randalstown. In his lapel Willie has a Mason badge while Willie must be going to have or has had a cup of tea for you can just make out the top of the teapot. Willie's face is full of character from his smile to the twinkle in his eyes, he looks the sort of man that could rattle out the yarns to you all day long 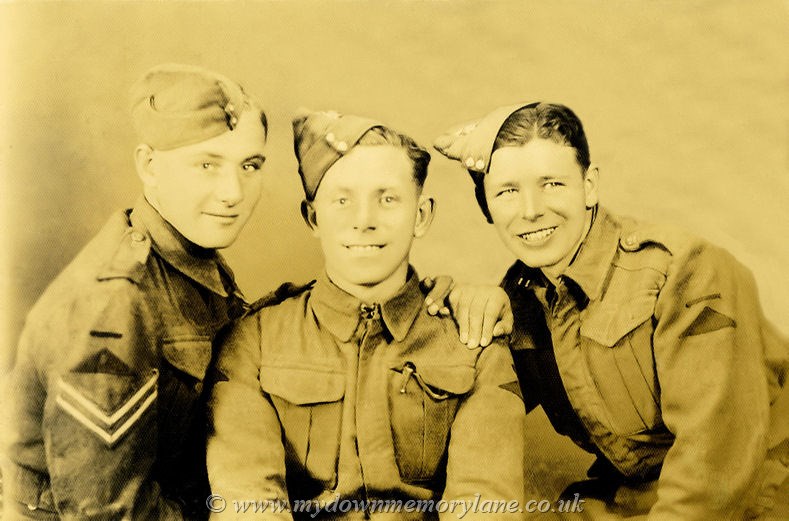 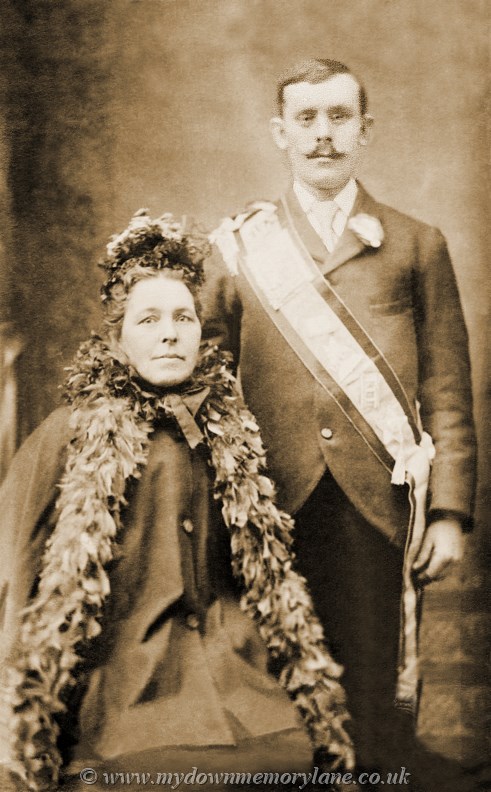 COMRADES 3377
In this studio photograph of three comrades from the Auxiliary Territorial Service was taken during World War Two.
Sadly only one is known at the moment and he is in the centre Harry Campbell. If you know the others or what the shoulder patch means please let me know.
CAMPBELLS 3374
In this studio photograph we have the Campell's, standing at the back is Henry Campbell wearing his Sash with a white rose in his lapel.
Seated is his wife whose first name is unknown wearing her finest bonnet and draped around her shoulders is a feathered boa. 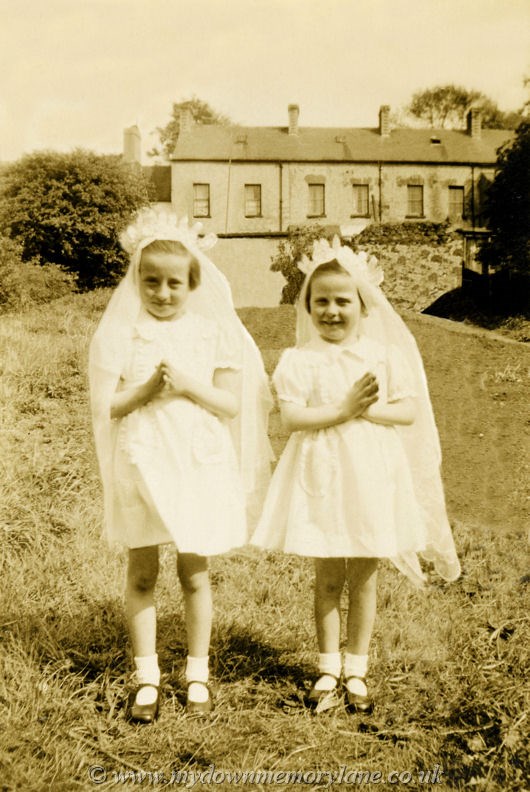 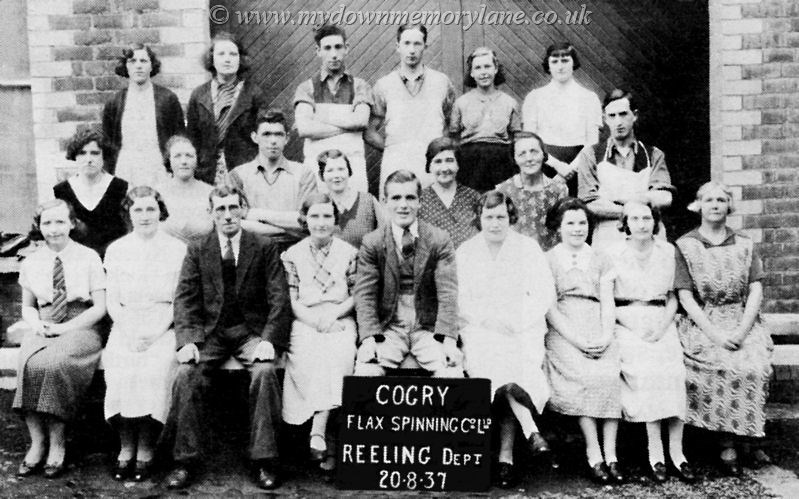 CORGY FLAX SPINNING Co.Ltd. 3551
These are the workers Cogry Flax Spinning Co.Ltd. who work in the Reeling Department having their photograph taken back on the 20th August 1937.
Now sadly at the moment none of their names are known to me but if you know please tell me and a large copy of the photograph will be sent to you.
CONFIRMATION GIRLS 3392
Standing in the back garden are these two immensely proud girls having their photograph taken before their Holy Communion, at the moment their names are unknown. 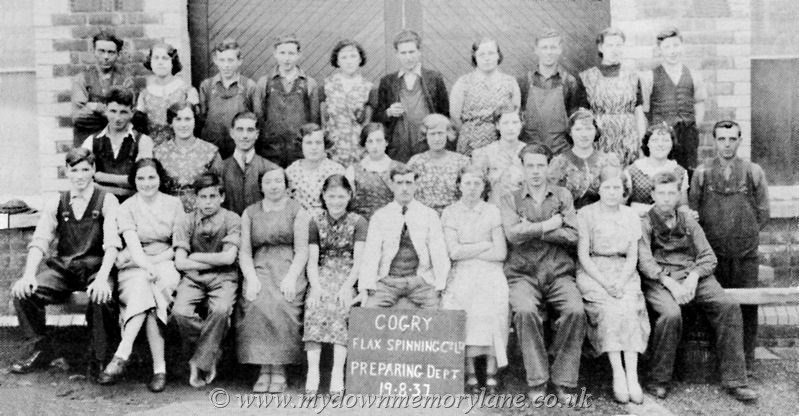 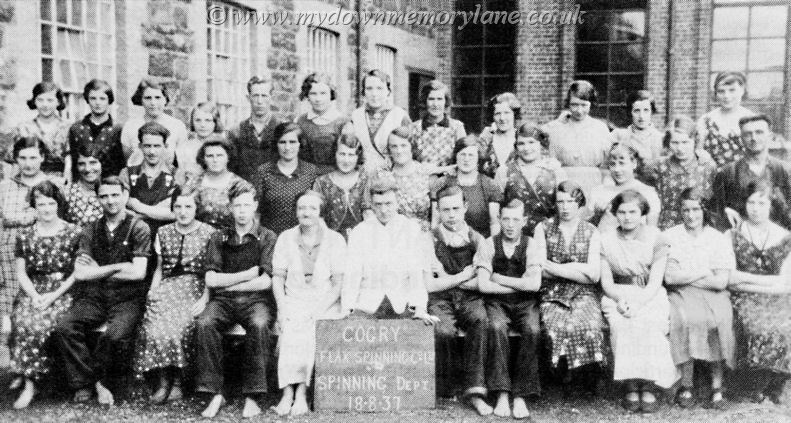 CORGY FLAX SPINNING Co.Ltd. 3552
All smiles for the camera are the workers of the Preparing Department at Cogry Spinning Co. Ld. Where the fllax was prepared for the other departments
way back on the 19th August 1937.
CORGY FLAX SPINNING Co.Ltd. 3553
Now here at Cogry Spinning Co.Ltd. are the workers of the Spinning Department on the 18th August 1937.
Now sadly at the moment none of their names are known to me but if you know please tell me and a large copy of the photograph will be sent to you.
If you look closely you will see all the men are barefoot including one lady who is on the left of the board, the other girls must have put their shoes on for the photograph. In the spinning room, there was a process called wet spinning: there was always water and heat. They stood in bare feet in the water all day and frequently suffered from conditions such as ‘foot rot’.

COGRY PRIMARY SCHOOL 3555
Now in this school photograph taken in 1925 you can see that the pupils are much younger and do not seem to know what is going on except for the two in the centre of the middle row. One little girl sixth (from the left) does not seem at all happy at what is going on, and who can blame them. For they are brought ouside and told to sit still while this man with his tripod and a large box on top keeps throwing this lage black cloth which is attached to the box
over himself which comes down to his waist, then pops out to make adjustments to the box and eventually pops and tell the pupils to sit still
Now sadly at the moment none of their names are known to me but if you know please tell me and a large copy of the photograph will be sent to you. 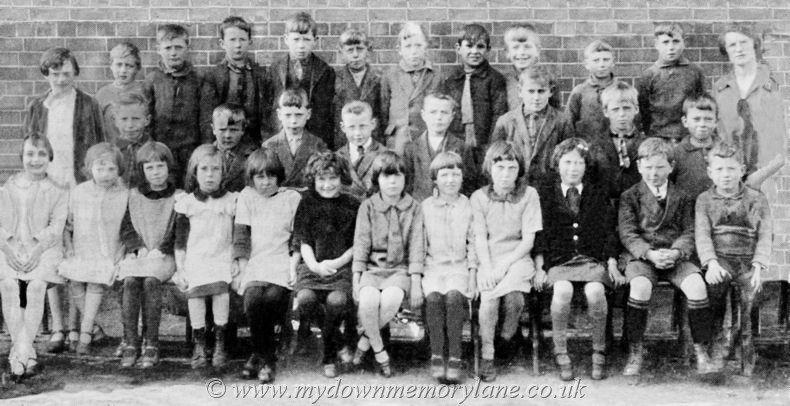 COGRY PRIMARY SCHOOL 3554
It's 1924 and here we are at Cogry Primary School where the pupils are having their annual photograph taken.
All the girls are dressed in their best dresses while boys being boys have done their best, we didn't care as long as we were clothed we could go out and play.
Now sadly at the moment none of their names are known to me but if you know please tell me and a large copy of the photograph will be sent to you. 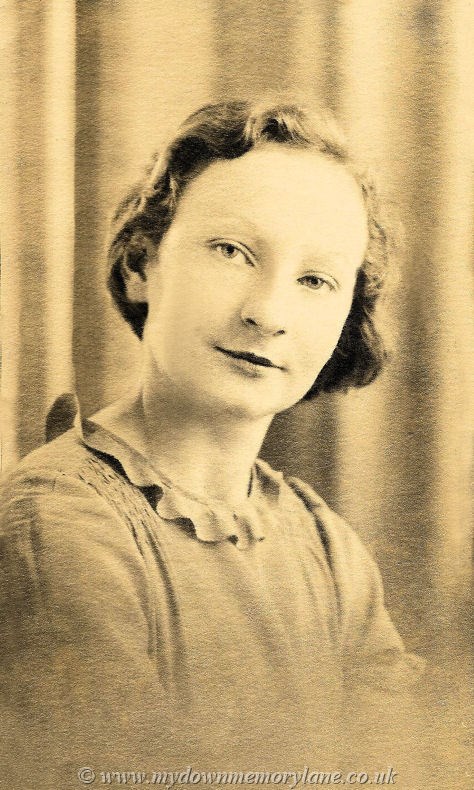 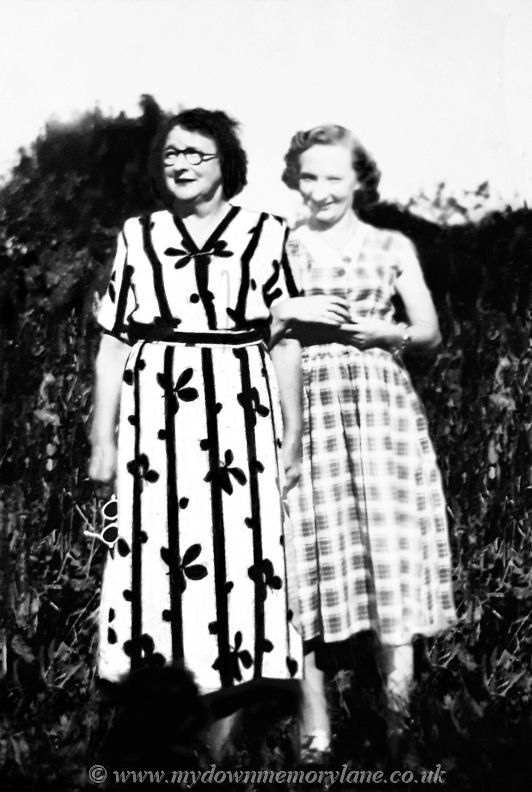 IN THE GARDEN 3849
Out in their back garden in Caddy enjoying the sun someone snapped this wonderful photograph of them. It's Margaret and Helyn Craig who are mother and daughter. They were known to the younger generation as Aunt Peg and Auntie Helyn. Now the lady that took the photograph is unknown, how do I know it was a lady? Well the shadow on Aunt Peg's dress has curly hair.
HELYN CRAIG 3849
It's 1938 and this is Helyn (Marguerite) Craig from Caddy who was having her photograph taken in a studio. Helyn was a cousin of John McIlroy who went to Canada that same year.