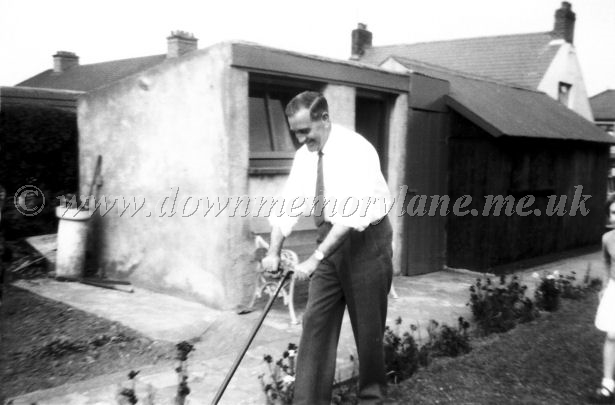 PICNIC TIME 3583
Here sitting on a rug having a picnic for there is a cup in front of them we have on the right Bill Topham, Agnes Stevenson's Son in Law with his arm round either his sister or cousin who's name in unknown. But that doesn't stop them smiling at the third person who is taking the picture. Now in the background is a car which could be theirs or not, but back in 1922 there was not a lot to do so picnics and going for long walks was the in thing then.
Now you see that box with the handle on it well back then that is what they took photos with it was called a Kodak Camera and it took 12 photos on
reel of film which you then took to the Chemists for them to make your photos and negatives. 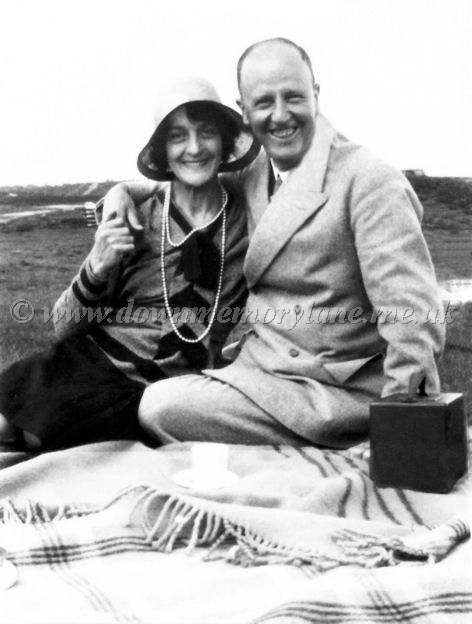 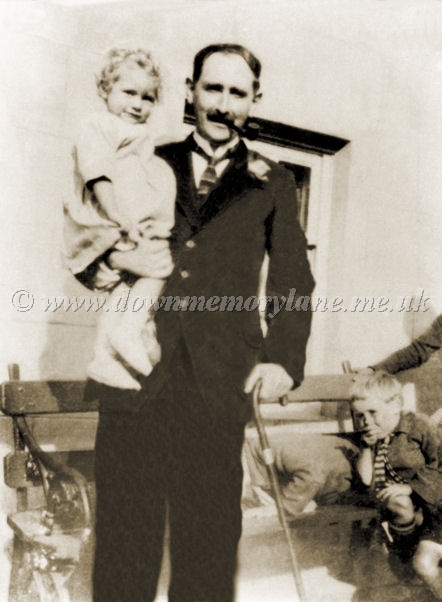 PAPA STEVENSON 3584
Here we are in the back garden of the Stevenson home in 1923 and back then children were only 'To be seen and not heard'. But MrStevenson (John) must have been of a different breed for here he is with his suit on and a rose in his lapel and walking stick. Yet he picks up Betty in his arms to have their picture taken, this shows in the two boys behind for they could hardly stop laughing at what their father had done, showed he loved his children. 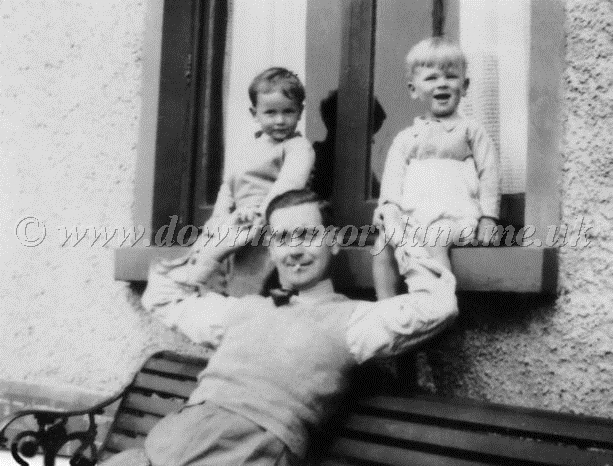 ON THE BEACH 3582
It's 1922 and we are in Donaghadee down at the sea front and smiling at the camera on the Left Spencer Stevenson with his arm protectively round his
his little sister Betty Stevenson and next to her his her brother James Stevenson out for a walk. The black thing to the right of James is a Cat! 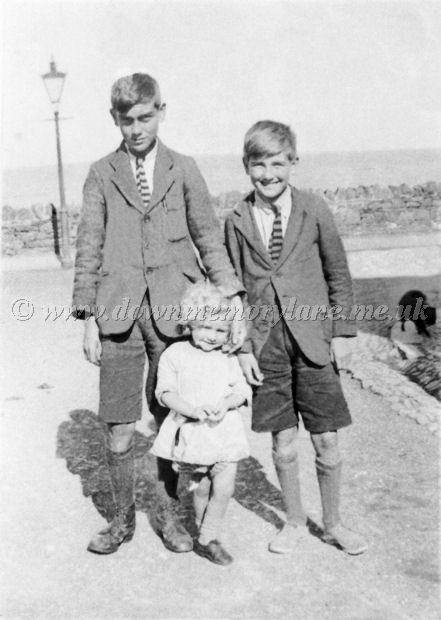 SPENCER FAMILY 3585
My how time does fly by so fast,this is the young Spencer taht was in the photo at Donaghadee sea front with his little sister and brother.
Now Spencer married a Minnie Campbell and settled down in Donaghadee and of the two boys behind him the one on the right is his son Stuart in 1949.
Relatives that have emigrated now frequently have a place to stay while on holidays. 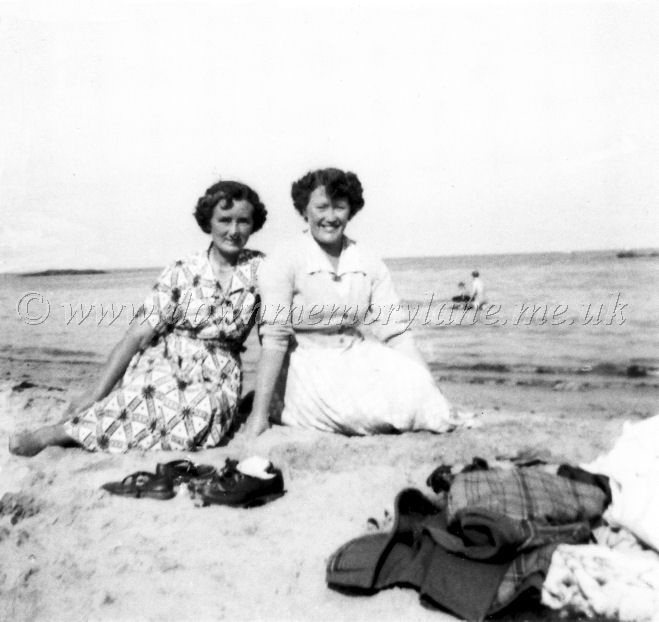 RELAXING 3587
Having a chance to relax and have natter before the kids and fathers come charging back looking for food and a hot cup of tea. Here we find Mrs Minnie Stevenson and a friend back in 1952. 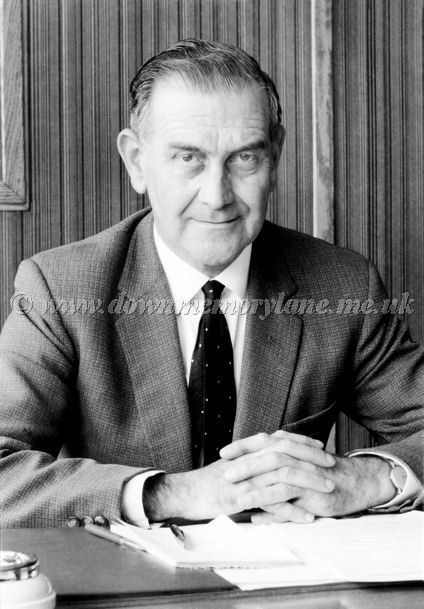 SMILER 3588
Out in the back yard having their picture taken you would think it was for the best smile.
On the left is Rosemary Stevenson then her brother Stuart and finally Margaret Stevenson who was over visiting from England. 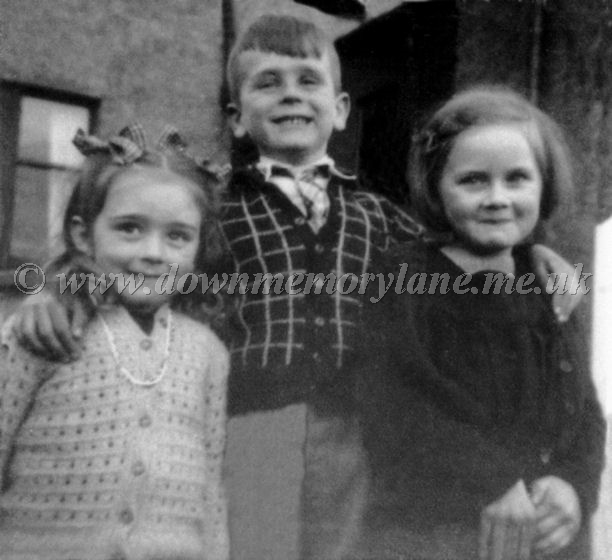 WORKING HARD 3589
This is Spencer Stevenson is his back garden mowing his lawn back in 23rd May 1961 and he is Smiling! It must be for the camera for no one in those days smiled when using the old hand mower, it was push, push and hard as well and if it had rained the night before it was a nighmare to cut no
matter how sharp the blades were and you sharpened the blades yourself unless you had money. You can just see a little girl to the right but there is not enough of her to say who she is.

OUT FOR THE DAY 3647
Sitting on the bench at the wall overlooking the sea at Donaghadee and having such a great bit of enjoyment Jessie Stevenson with her grandson David
on her knee while beside her is her daughter Betty Stevenson back in 1949.

SPENCER STEVENSON 3596
This is Spencer Stevenson having a publicity photograph for his job which is Commerce Director of Short Bros and Harland in 1950. 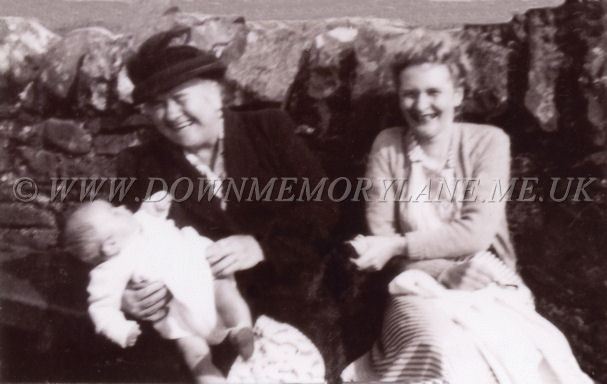