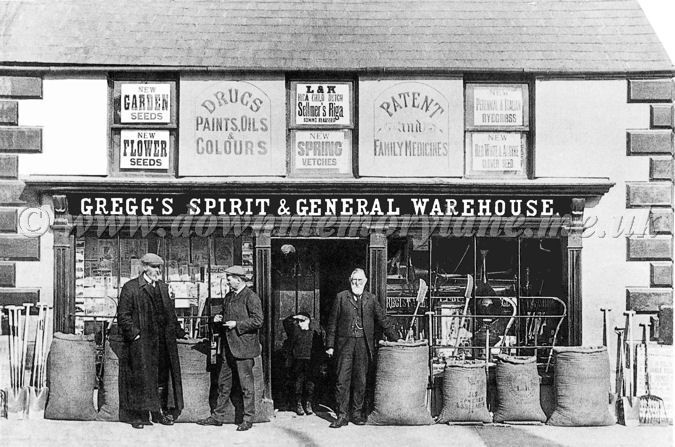 GREGG'S GENERAL WAREHOUSE 3168
Here we are in Lower Square Ballyclare in front of Gregg's Spirit and General Wharehouse. Standing proudly in the entrance to premises is James Gregg, now this was only the front of the building for it extended a good bit along Park Street. You name it and James sold it, from general hardware goods some of which you can see at the front of the shop. The sacks of animal feed with plenty of spades and on the right what I would call a potato fork.Venture inside and you would find that he also sold groceries, newspapers, fishing tackle, medicines for all different ailments also guns and ammuniton.
From the posters in the windows James sold Garden and Flower seeds, indoor and outdoor paint, oils and colours. He also sold various types of Flax seeds and Spring Vetches, Vetches make excellent pasture or hay, but they also are used extensively as a green manure crop. Increased yeild of crops following Vetch turned under for green manure is brought about in part by the additional nitrogen the Vetch provides. When used as a pasture crop, Vetches often are mixed with small grains or annual or Italian ryegrass, which James sold along with Red, Dutch White and Alsike Clover seed. The Clover seed was used for
used for hay, silage, and soil improve-ment. Inside the premised new customers would often jump when this voice would shout out " Scratch Cockey", the voice belonged to a Cockatoo and was famous in the district, James naturally was given a nickname which he answered to Cockey Gregg.
Now there were customers who came in and spent money and spent money for behind the store Jame's had a licensed bar and a billiards room.
Pages: