ARMAGH 3775
You are on the outskirts of the city and looking towards Armagh City from the left, here in the foreground are a row of thatched cottages with their washing out on the line so they are still occupied the row then goes down the road and turns to the right where they stop at the at the nice new buildings, perhaps it will not be to long before they are pulled down to make way for progress and the old ways will soon be forgotten. Now the buildings to could be a business for there are two high chimneys and a high wall surounding it. In the background near to the middle you can see a large imposing building, that is Saint Patricks Cathedral [Church Of Ireland] Saint Patrick founded his great church on the hill of Armagh in 445AD.  The present building dates from 1268 and was last restored in 1834. The Cathedral contains an 11th century Celtic Cross and a number of sculptures from the Iron Age to the 20th century. The High King of Ireland, Brian Boru, was buried in the Cathedral grounds in 1014.
Now over to your right in the background stands another large imosping building with it's imposing twin spires is Saint Patrick’s Catholic Cathedral. Which stands on an elevated site overlooking the city, It was on this hill on the 17th March 1840 that the foundation stone for Saint Patrick’s Catholic Cathedral was laid by Archbishop Crolly. It was over 60 years before the Cathedral was completed, with consecration on 24th July 1904. 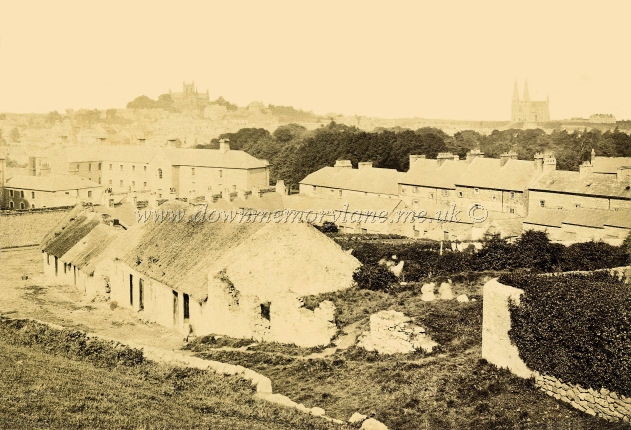 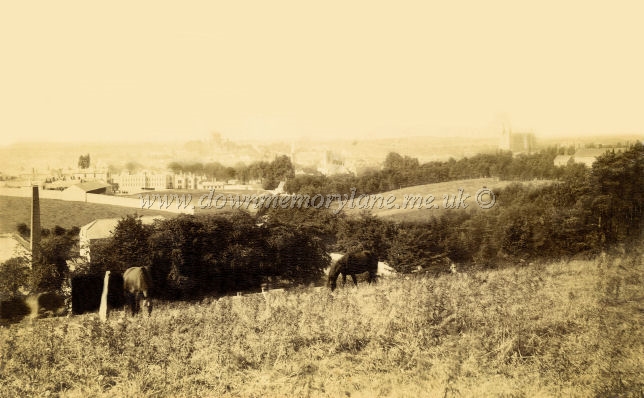 ARMAGH 3776
What an ideally scene the photographer as taken of Armagh it's looks so peaceful, with the horses lazily eating the grass in the foreground.
In the background to the right with it's tall spires is Saint Patrick's Roman Catholic church while near to the middle also in the background towering over the city is Saint Patrick's Church of Ireland. Just down in front of the church is the large Army barracks with soldiers marching on the parade ground, at one time the Royal Fusiliers were posted there. Further to the front is a tall chimney possibly belonging to a mill. Could have been a Linen mill for in front of the chimney is a large field ideal for bleaching and drying the linen.