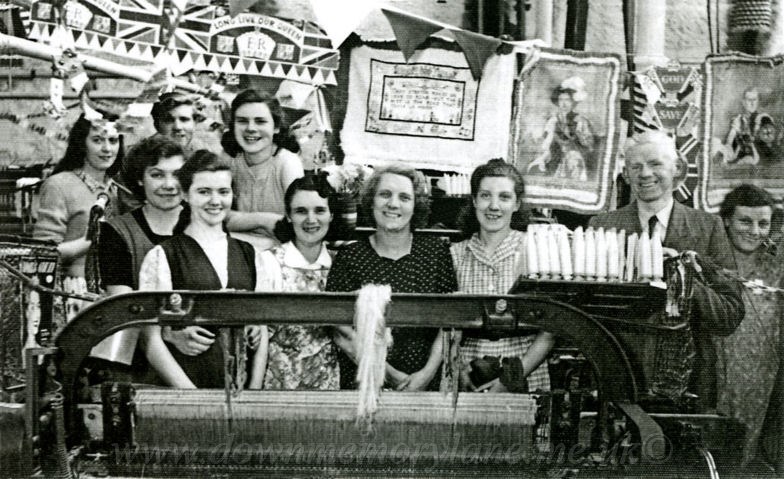 THE ANTRIM WEAVING Co.Ltd. 228
This is Coronation Day June 1953 and reading from the left in the back row are Sally George, Bobby Smith and Margaret Fee.
Front row are Pauline Clark, Maureen Kelly, Tilly Hannan, Mary Johston, Ruth Hamill, Tommy Fields (Manager) and Jeannie Jamison. Bobby Smith by the way went on to marry Ruth Hamill. 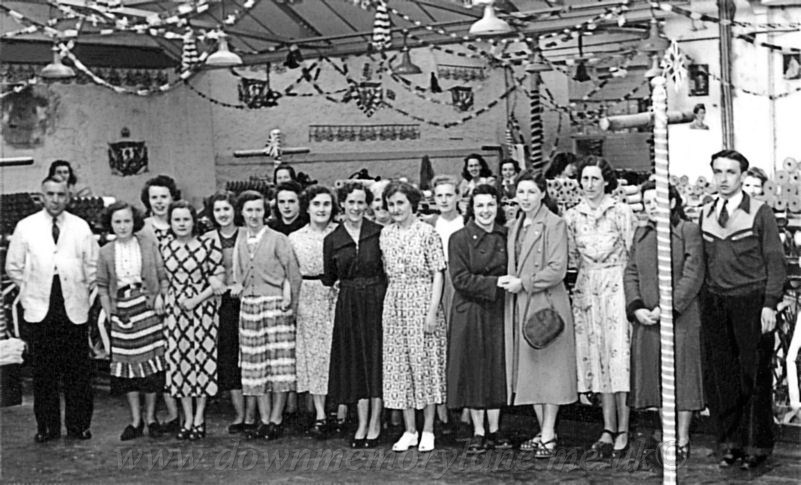 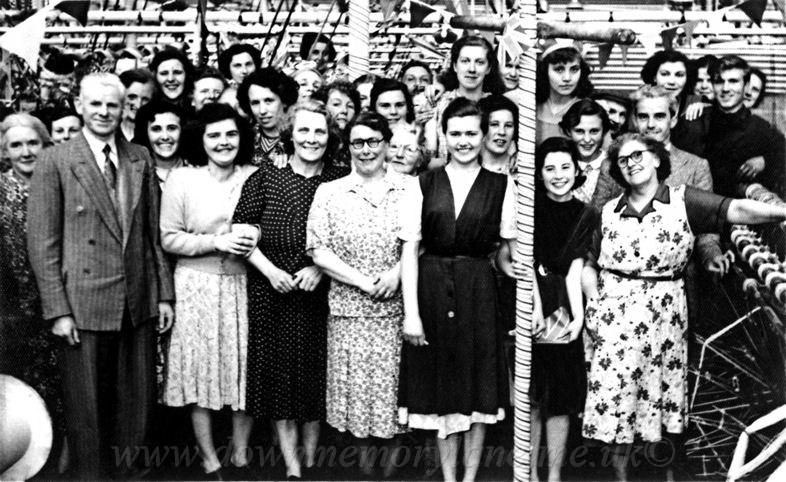 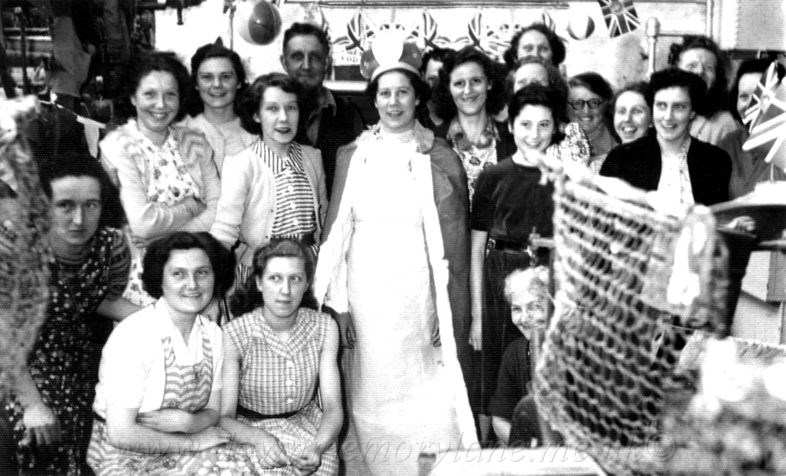 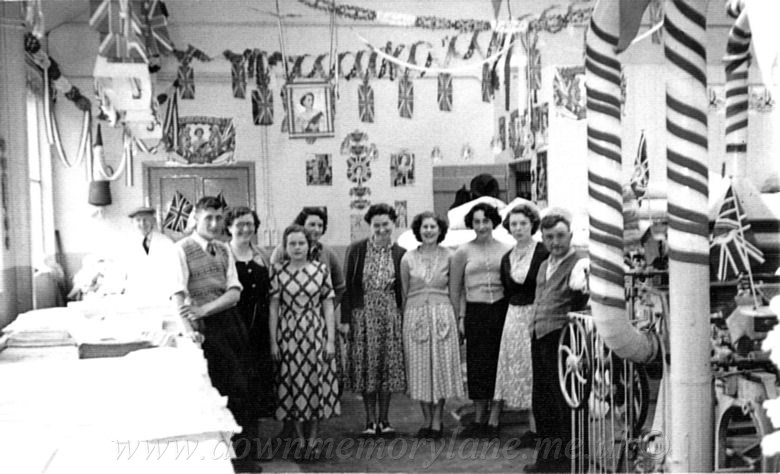 THE ANTRIM WEAVING Co. 596
Staff from the Antrim Weaving Company marking the Coronation of Queen Elizabeth II in style on June 2, 1953. Here we have the 'Queen' surrounded by her subjects, kneeling down in front of her is Unknown, Ruth Hamill and unknown. The next row are Unknown, Unknown, Sadie Hamill (Ruth's- mother), the Queen unknown, Unknown and Unknown. At the back we have Margaret Fee - Loughlin, Mr. Nicholl, Tilly Blair, Kate McAudrey - McKeever, the rest are unknown. 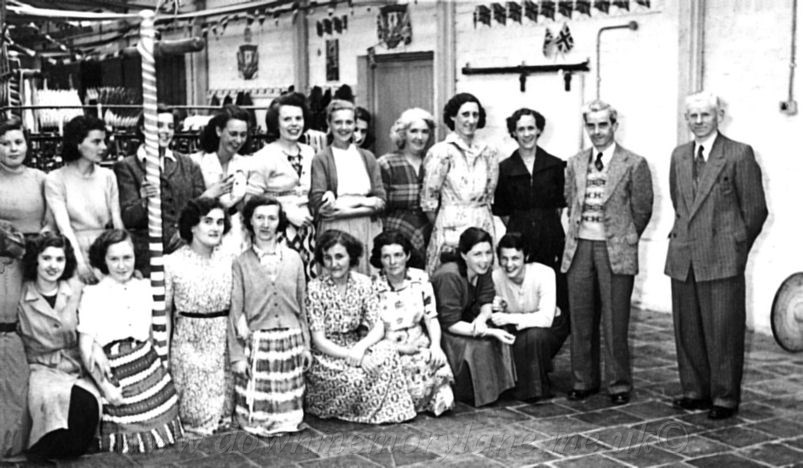 THE ANTRIM WEAVING Co. 1042
At first I thought that the women were kneeling before the managers for a pay rise, but it's not, they are celebrating the Queen's Coronation in 1953.
In the back are Lily Robb, LizzieLaughlin, Margaret McVeigh, Margaret Rainey, Mary Stewart, Unis Kelly, Annie McGill, Mrs Craig, Mrs T.Hannan and Agnes Hannan. Kneeling in front Jean Ashe, Eileen Rankin, Emily Barr, Martha Wallace, Martha Kane, Mrs Allen, Annetta McCoy, Mary McGill, Jimmy Roberts and Mr. Fields. 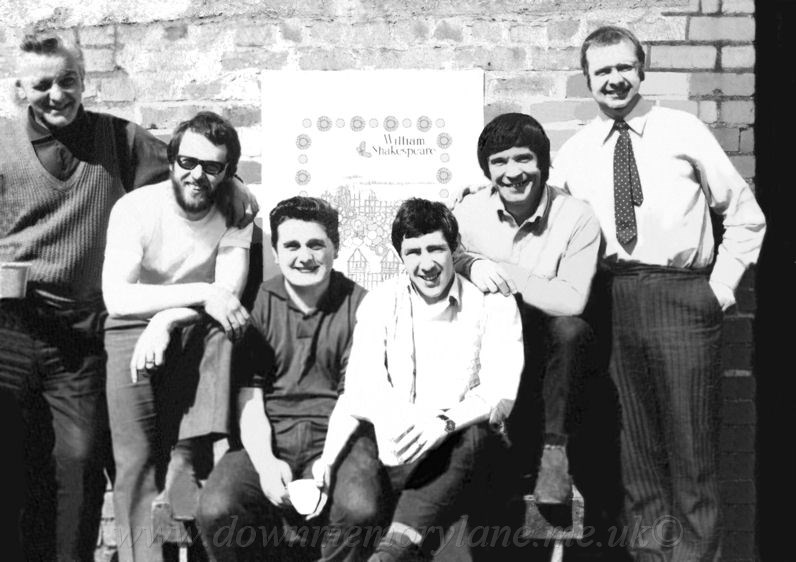 THE ANTRIM WEAVING Co. 1123
Taken outside The Antrim Weaving Co. in the 60's left to right we have Robbie Tennant, Maurice Ritchie, Walter Kyles, Alex McKee,Artie Walsh and Jim Buckley.
THE ANTRIM WEAVING Co. 1041
Here we have the workers of The Antrim Weaving Company in June 1953 celebrating the Queen's Coronation.
Standing at the front row are Unknown, Eileen Rankin, Julia Hannan, Unknown, Martha Wallace, Emily Barr, Agnes Hannan, Martie Kane, Unknown, Unknown, Marcary Law and George McMaster. Behind them are Mary Stewart, Jean Baker, Unknown, Charlotte Craig, Unknown and Eve Kelly.
At the back we have Sally George, Unknown and Annie Craig.

If you look closely at the frame in front of them to the ledges and see the white fluff on them that they were breathing in daily.
Index

This information was given to me by Dooreen Foubister nee Hamill. 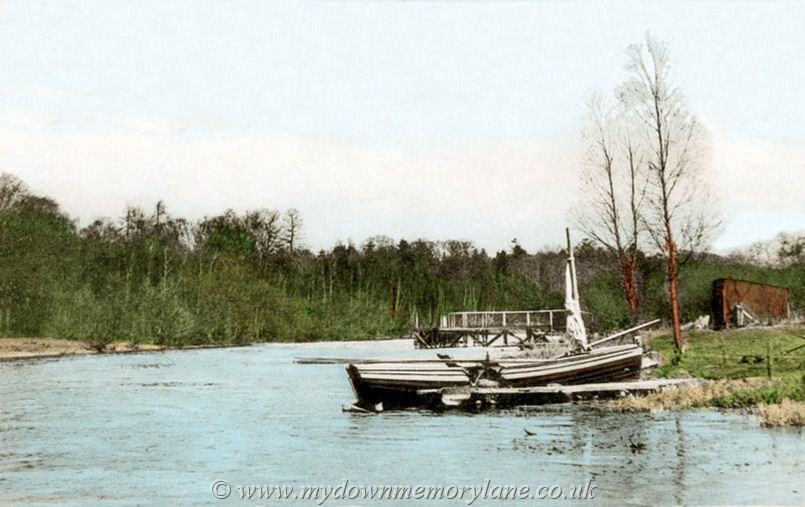 THE CUTTS 3540
This part of the Sixmilewater river back then when it was called the Cutts, where the fishermen brought their catch ashore. In years to come on the opposite bank is where Antrim Yacht Club would be.
The boat in the foreground still has it's sail up, boats often left from here to take visitors out onto Lough Neagh and some even went in rowing boats and enjoyed it!